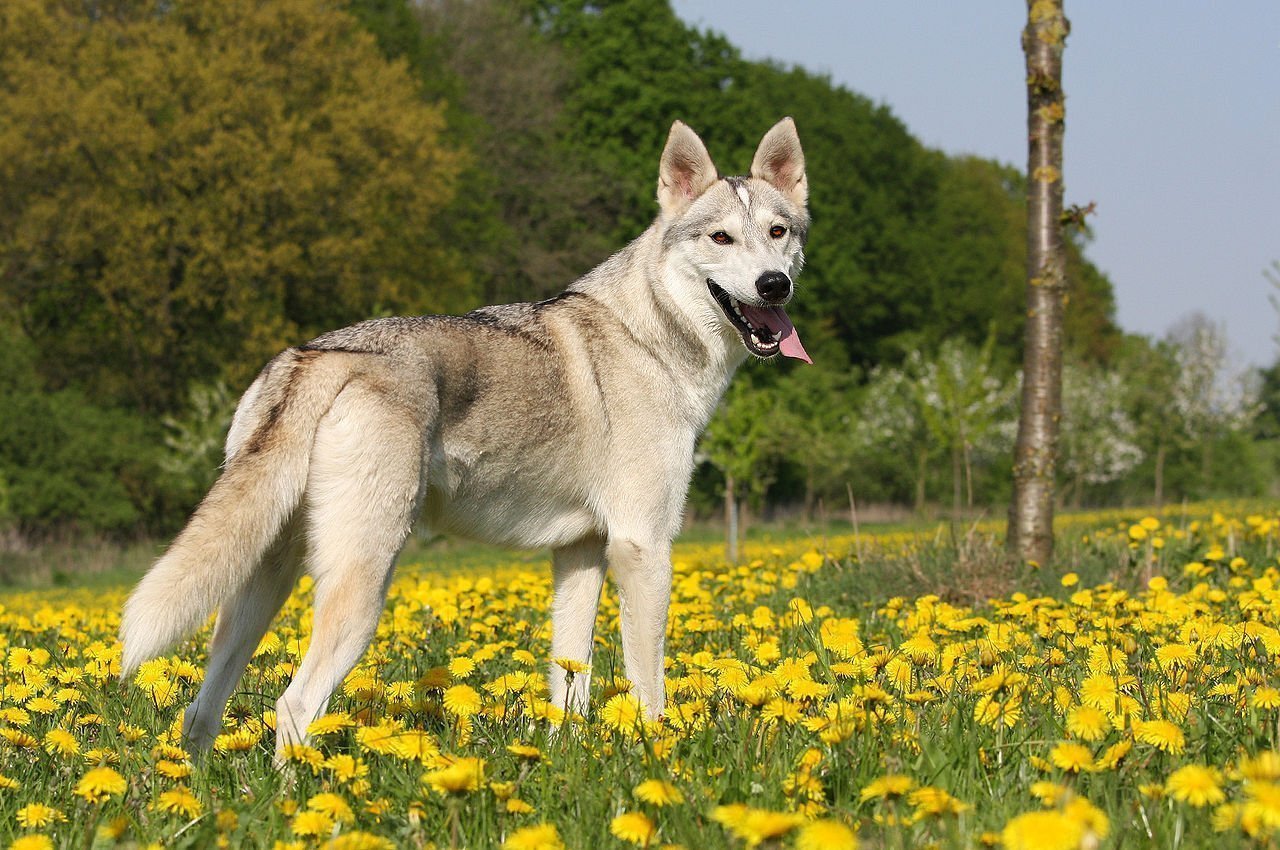 Have you ever mistaken a dog for a wolf? Sadly, everyone doesn’t own a pack of wild African wolves at home. But if they did, you would instantly relate your mistake to biological evolution and taxonomy. Yes, the ancestor of every dog, in reality, was a wild scary (and thankfully not were) wolf.

And some dogs are still the subspecies of the now-extinct gray wolves (also the predecessors of the living wolves). But they still resemble the gray wolves looks, features, temperaments a lot. Want to know about the dog breeds closest to wolves? Read this article till the end.

We will take you through the 13 most popular dog breeds that are similar to wolves. Thanks to the resourceful study by NatGeo (refer to this study) that found genetic similarities to wolves. Ready? Here we go.

Freak not, as this too much of a wolf-looking species are dogs in reality. Introduced as a part of a scientific innovation a long time back, this wolf-hybrid was developed in Czechoslovakia as an ideal blend of Carpathian wolves and German Shepherds.

They share many of their features, including hair, build, strength, in common with the wolves. However, the temperament and intelligence resemble more like that of the German Shepherds. The Czechoslovakian Wolfdogs are more popular as police or military dogs in the realm of tracking, search-and-rescue, and herding jobs.

This breed has some distinctive features like amber eyes, triangle-shaped erected ears, dense fur with a shade of yellowish to silver-grayish.
The good news is, these wolf doppelgangers can easily be socialized and domesticated. When trained properly with a full-time mentor, they make a perfect and playful family companion.

But make sure, you don’t miss, an eye on them while introducing to someone new.

The most handsome and furry version of their wolf brethren, this sled-pulling breed comes with a spectacular wolfish appearance but comparatively larger build, extraordinarily high energy level, playful personalities, and hunting spirits. These gray and white fur coated wolves look-alikes stand almost 25 inches high with a morphologically different broad breadth of chest and a very distinctive brownish head and tail.

These sturdy dogs are genetically the most similar to the wolf species and are often injected with the wolf genes in order to retain their genetic similarities. Chances are more, you will come across the “hybrid vigor” of this breed that offers a larger and stronger version.

Thinking to adopt these lovable four-legged? You might need to do a little homework then. It’s important to understand the nature of these wolf offspring in order to be able to cope with their stubborn and reserved demeanor. This breed also needs a specific care regimen.

Another of the wolfish kind, this highly affectionate, sociable and active breed makes an excellent domestic pet who can’t deal with solitude and idleness. Originally bred in Siberia by the Chukchi tribe for sled pulling, hauling and herding works, this breed is high-energetic, intelligent, cheerful and comparatively less-obedient companions who need a constant activity to meet their daily needs. A Huksy can run for very long time and distance.

These medium-sized dogs similar to wolves in terms of temperament and behavior and are best distinguished with their huge volume of fur, projected ears, distinctive shades of color. They require a lot of space and sometimes you can even find them digging holes in the backyard for extra stimulation.

If you are planning to pet this lovely four-legged species, be ready to carry a brush alongside as they need a constant brushing for removing their dead furs. These dogs love to live in packs and therefore need your constant company.

Also popular as Alsatians, this loyal, protective and highly intelligent breed is probably the one to have distinct wolf-like aesthetics more than any other breed on the planet. With a build, comparatively larger and bulkier, the German Shepherds have attractive long manes, jet-black coats, and monochromatic body color like their wolf predecessors.

With an electrifying eagerness to learn and follow commands, these dogs are ranked the third most intelligent dogs. They make excellent guard dogs, police dogs and sometimes terrific family companion for their featured kindness and protective manner towards children and old people.

And if you are planning to adopt one, you might need to be extra cautious in keeping them engaged. They become easily bored, destructive and sometimes overprotective if you don’t socialize them properly.

Yet another breed that looks like wolves but known for their affection, playful nature and quick grasping abilities. Also known as Qimmiq/Canadian Inuit Dogs/ Canadian Husky, these massively sized dogs have an excellent history of hunting and sled pulling. They come with a huge capacity of work and make a great loyal companion for any family.

To be a great pet parent for a Canadian Eskimo Dog, you must have enough room to shelter and motivate these strong, smart, energetic breed. Best suited in the winter clad areas, these dogs need an extensive routine of exercise. and have a high-key predatory nature.

More of a recent wolf-hybrid, these dogs are genetically the most similar to their wolf ancestors and developed from a blend of European wolves with the German Shepherds. With a wolf-like structure and even facial expressions just like them, they are nothing short of a wolf replica. Despite their strong canine feature, these loyal, loving and smart four-legged animals make the most doting family pets.

With that said, dogs of this type need a leading mentor to guide them and more so because of their more predatory and less obeying instinct.

This medium-building wolf-offspring is a moderately active breed and need less manipulation from their owners compared to other wolf hybrids. With features like scissor sharp teeth, compact paws, slanted nut shaped eyes, erected ears and double coated thick fur of red/black sesame shades, they are the attractive, playful, loving creature.

If you have the slimmest intention of adopting them, you should know that a Shikoku has a great fondness for outdoor activities.

Another dog breeds closest to wolves, are the Greenland Dogs that were migrated from Siberia to North America by Thule clan. With a relatively huge build, short, masculine legs, wedge-shaped head, slightly tilted eyes, and a thick coating of water-repellent fur in two layers, these arctic dogs are genetically bred from the now-extinct Taimyr wolf for strong and heavy-duty works like pulling sleds, hunting and more.

An interesting feature about these wolf descendants is that they have a triangular shaped area on shoulder called “ulo” that resembles a Greenland woman’s-knife.

However, if you want to bring a Greenland Doghome, keep it always busy. They are notorious for craving things that are not part of their prey. It could be even your furniture, ahem!

A native breed of America, Kugsha or Amerindian malamutes are born with a strong fetish for freedom and travel. With an assertive attitude and high IQ level, this wolf hybrid is carefully bred to be a proactive dog for sledding and other load carrying jobs.

It’s true that these dogs are genetically the most similar to their wolves predecessors, and only recently been domesticated, but they can make a great loyal and affectionate companion for an outdoorsy kind of owner.
However, they need a lot of exercises and a continuous check on their predatory drive.

These are the dogs that are carefully bred to look like wolves and work like super dogs at domestic chores. Some studies even suggest that these dog species are crossbred from Malamutes, German shepherd, and Siberian Huskies and share the same temperament and personality as a husky and same color and shape like a wolf. Be as it may, these dogs are strong and active and require a lot of recreational activities to stay healthy and motivated.

If you are about to pet for the first time, parenting Northern Inuit Dog might send your spirits crashing. In fact, these smart and stubborn dogs come for no easy deal and crave a lot of attention. When left alone, they might easily develop separation anxiety or depression.

Did you manage to catch your favorite HBO Game of Thrones episodes on HBO? Guess what, the entire series is full with this breed that are playing the famous dire wolves. Don’t believe me? Check the next episode..

Meet this rare breed that has been gaining the eyes for their stunning looks and similarities with wolves. These dogs are highly intelligent and possess sharp thinking quality and quick learning ability without much instruction.
What’s more, the NAIDs also get along with kids very easily and make a perfect pet companion. It’s mostly their wonderful nature which makes them also the perfect therapy dog.

Originated in Finland, the Tamaskans aren’t just dogs similar to wolves but are a mixed hybrid of huskies, malamutes, and even some sled dogs and living wolves. Sounds amazing, is not it? These big dogs have a scary wolfish face, wolf-shaped head, lanky structure, tall legs, and stunningly beautiful eyes. Not only that, but they also come in gray and black shades just like the wild wolves.

Intelligent, less dominating, agile and sturdy, these dogs have temperaments almost similar to the Huskies. They make a great pet and act wonderfully with kids.

Petting them is easy if you train them how to socialize. They can make a great guard dog as well.

Last but not least, the Samoyed has the striking charm of a white wolf. This working, hound breed is popular for its special bond with humans.

Originally bred for tracking, hunting and even posing a warm sleepover by the Samoyed people, they make an intelligent, ambitious and loquacious friend for people of all ages.

Want to be their perfect owner? You got to hear them bark, bellow, and howl, and you will never fail to listen to their woes to be a part of your family. The lack of a company, challenge, and proper activities might make these dogs destructive and withdrawing at times.

So now that you know that every dog has its animal spirit, wolf, it might seem complicated to own these breeds as pets. Fear not, you are not getting an unpredictable wolf attack any time soon.

The majority of the dogs mentioned in this article share only the aesthetic features of wolves while retaining their domestic virtue. In short, wolf hybrids are here to stay but with a bit of study and training, you could easily master their skittish and aggressive temperaments. So, carry on and select your type of pet-wolf today.