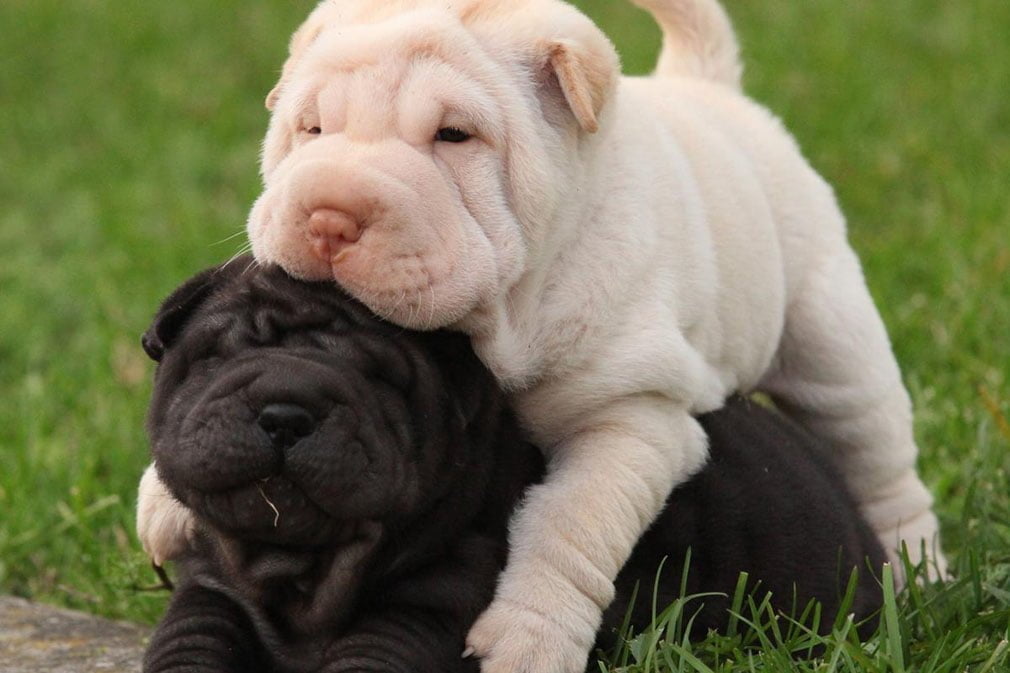 Having a furry companion around is great, whether you want to enrich your life with a new family member or are just plain lonely. Dogs themselves are the embodiment of animal companionship, and there’s a huge number of breeds for you to choose from.

However, depending on your needs, your living arrangements and the amount of time you can provide your pets, some breeds are better than others. This is especially true if you want calm dogs.

Whether you live in an apartment with thin walls or just can’t put in the time to exercise your pets, the calmer the breed, the better. And while this does not completely excuse you from your responsibility to give your dog exercise, calm dog breeds tend to be low-energy and are more likely rest their head on your lap than cause a ruckus at home. If you’re also living with children and other pets, then having a calmer, more docile pet is a must.

To help you out, we’ve compiled a list of 21 of the calmest dogs out there.

They also have low grooming needs and are easy to train despite being a bit independent. People who own then have noted that they can be a bit timid and sweet-tempered, making them perfect with children and other pets.

The Great Pyrenees is a large dog breed described as having a patient and calm temperament. They’re also very smart, and easy to train, though they can be a bit wary of strangers, making them a great guardian for your home.

They will need to be trained, since they’re stubborn and do tend to bark, but their patient nature works well with kids. They may require brushing once or twice a week, and maybe more during shedding season.

One of the largest dog breeds around, the Scottish Deerhound has a very gentle nature despite its size. According to an article by the American Kennel Club found, this breed loves to run around outdoors, but are quite docile and mellow when inside the home.

They’re good with both children and other pets, though they will need to be taught not to confuse smaller pets as prey. Their fur will need brushing at least once a week, and a bit of trimming every once in a while, to keep their fur neat.

This particular dog breed is a powerful dog, but they’re an easy going dog and very affectionate to both their owners and strangers. They can be trained to be guard dogs but are not as effective due to their friendly nature.

They’re better suited as family companions and can be a bit playful when around kids. Their fur also needs weekly brushing, especially so during shedding season, but is otherwise a low maintenance dog.

While this breed doesn’t do well in warm weather, they are one of the calmest dogs available out there. They are very easy going but can be very protective when its companions are threatened. Heavy exercise isn’t a prerequisite, but Newfoundland dogs will need a swim every once in a while. Because of their thick fur, they will need to be groomed at least twice a week, and they do drool quite a bit.

The Japanese Chin is a devoted animal that weighs about 4 to 7 pounds. This makes the breed the smallest calm breeds available, making them perfect for living in apartments or in smaller houses. They work well with pets, especially other dogs, children and even strangers.

They have been known to act feline-like, preferring to perch on high places. Because of their small sizes, their exercise needs can easily be met indoors. Their long coats are prone to matting, so brushing them regularly is a must.

Though relatively rare in the United States, they are laid back and calm and considered to be one of the going dog breeds. They will still need daily and are not prone to vocalize much, which is great if you live in an apartment building with thin walls. Although they don’t shed much, they will need to be brushed at least 3 times a week to prevent matting on their fur.

The English Toy Spaniel is a gentle, calm and quiet breed, but is completely devoted to its family and very playful when you let it. They are very easy to train, and their exercise needs are easily met indoors, though they don’t need to exercise much. They will need to be brushed twice a week, since their fur is prone to matting.

Despite their small size, the Shih Tzu are surprisingly robust, with strong bones and heavy muscles. They are a very devoted companion and very affectionate, preferring to spend time on their owners’ side or lap. While their exercise needs are minimal, making them perfect for living in an apartment, their grooming is quite extensive.

They’ll need to be brushed several times a week and their hair will need to be trimmed. Because of their thick fur, they also don’t do well in warm climate, unless your place has air conditioning.

One of the most popular dog breeds, and also one of the calmest. They’re a perfect breed to keep inside an apartment, because of their low exercise needs, and they’re generally low maintenance. They love to goof around and show-off and are great with children. Like most breeds with folds on their skin, the skin under the folds will need to be checked regularly.

Despite its intimidating size and appearance, these dogs are very loyal, and would prefer to spend time close to their owners. This makes them excellent guard dogs, and they can be wary of strangers. They do well with kids, other dogs and pets, but keeping 2 males together may cause aggression between the two.

This dog breed is easy to maintain, with very little requirement in terms of grooming. Their wrinkles will need to be checked regularly, however.

Another large breed that is generally calm and gentle, the Bull Mastiff is a great guard dog, given that it’s very protective of its family. These dogs generally don’t make noise and are not very excitable.

Although there might be issues keeping this animal with other dogs, especially male dogs, they are good with children if they are raised together and would not even move much if kids are playing with them. Coat care and grooming is minimal, but they tend to drool a lot.

Also known as Africa’s Barkless Dog, the Basenji is a sweet breed, and very intelligent. As their moniker would imply, they don’t bark, if rarely, and are small, making them perfect for an apartment life. They do very well with kids and other pets, though when left alone and bored, they will make a lot of mischief. The Basenji is a fastidious dog, with minimal coat care needed, and they don’t produce a strong “dog smell” either.

The Great Dane’s size can be a bit overwhelming to many people, but they’re a gentle giant, who love spending time with the family, especially kids. They’re also well-mannered and will do well when kept with other dogs and pets. You will need a large bed for this breed because they’re known for their back problems, but their grooming is minimal, with only a bit of drool to worry about every once in a while

The Saint Bernard is a low-energy dog breed that don’t bark much, but when they do, it can be very loud. They are very patient and gentle, but they’re not very playful, so kids might find them boring, though they’re safe enough. Despite being stubborn, they do love their family. They drool excessively and will need a weekly brushing to keep them happy. Because of their size, they will need a lot of space, but don’t need a lot of exercise.

The French Bulldog’s compact size and low activity levels make them excellent for life in the apartment. They also do well with children, and other pets, and love to play a lot. They rarely bark but will call out an alarm if they sense an intruder, making them great watch dogs.

Their coat requires very little maintenance, although their wrinkles will need tending to every once in a while. If you want a dog that you can easily train, then the French Bulldog is also great, as they are a very smart breed.

The Schipperke’s size and relatively low energy makes them a perfect candidate for living in the apartment. They’re also known to be smart dogs and are easily trained. Despite not needing to exercise as much, these dogs will need attention, and does well with kids who like to play.

Their thick fur does make maintenance a bit of a hassle, but since they’re a smaller breed, it’s a lot more manageable. They’re not known to be loud but will let out a sharp bark every once in a while.

Known as one of the most good-natured, easy-going breeds out there, the Basset Hound do well with other animals, and children. They tend to be low energy, as most of the breed have back problems when they play too much. Its short stature and a generally quiet demeanor make it a good pet to have in apartment buildings. They need minimal grooming, especially around the folds on its skin, and will drool just a bit.

The English Bulldog is known for being lazy and docile and is considered to be one of the most mellow dog breeds. They’re generally friendly to people, children and other dogs, but can be aggressive to dogs they haven’t met before.

They can’t tolerate hot weather, and while they require very little exercise, they do love walking around the yard. Like many wrinkled dogs, you’ll need to regularly check the folds on their skin, but their coats need minimal grooming.

A very loyal and protective pet, the Shar-Pei is a great guard dog, provided that it’s been trained properly. It’s a calm breed, and very docile, though would appreciate a short walk for exercise. Their mellow demeanor makes them perfect for living in the city, and in apartments. They also need very minimal coat care, though their skin folds will need constant checks to ensure their health. Though they tend to be stubborn, they are very smart, and can be trained easily.

Its small size and very low exercise requirements make the Chihuahua a good companion if you live in an apartment in the inner-city. It’s a very alert dog, and very intelligent, making them a good candidate for training as well. Depending on the type of coat it has, Chihuahuas may need minimal coat care if it’s a smooth-coat variant, or weekly brushing if it’s the long-haired variety. Their friendly nature makes them good companions for kids, and because of their small size, there is very little problems with them roughhousing with kids.

Choosing the right dog breed may be overwhelming, given the huge number available out there. Aside from each breed’s tendencies, you’ll also have to remember that much like humans, each dog has an individual personality.

Although certain breeds have tendencies to be calm, they’ll still need to be trained in order for you to fully take advantage of that given trait. Just make sure to do your research, give them all your love, and the rest takes care of itself.