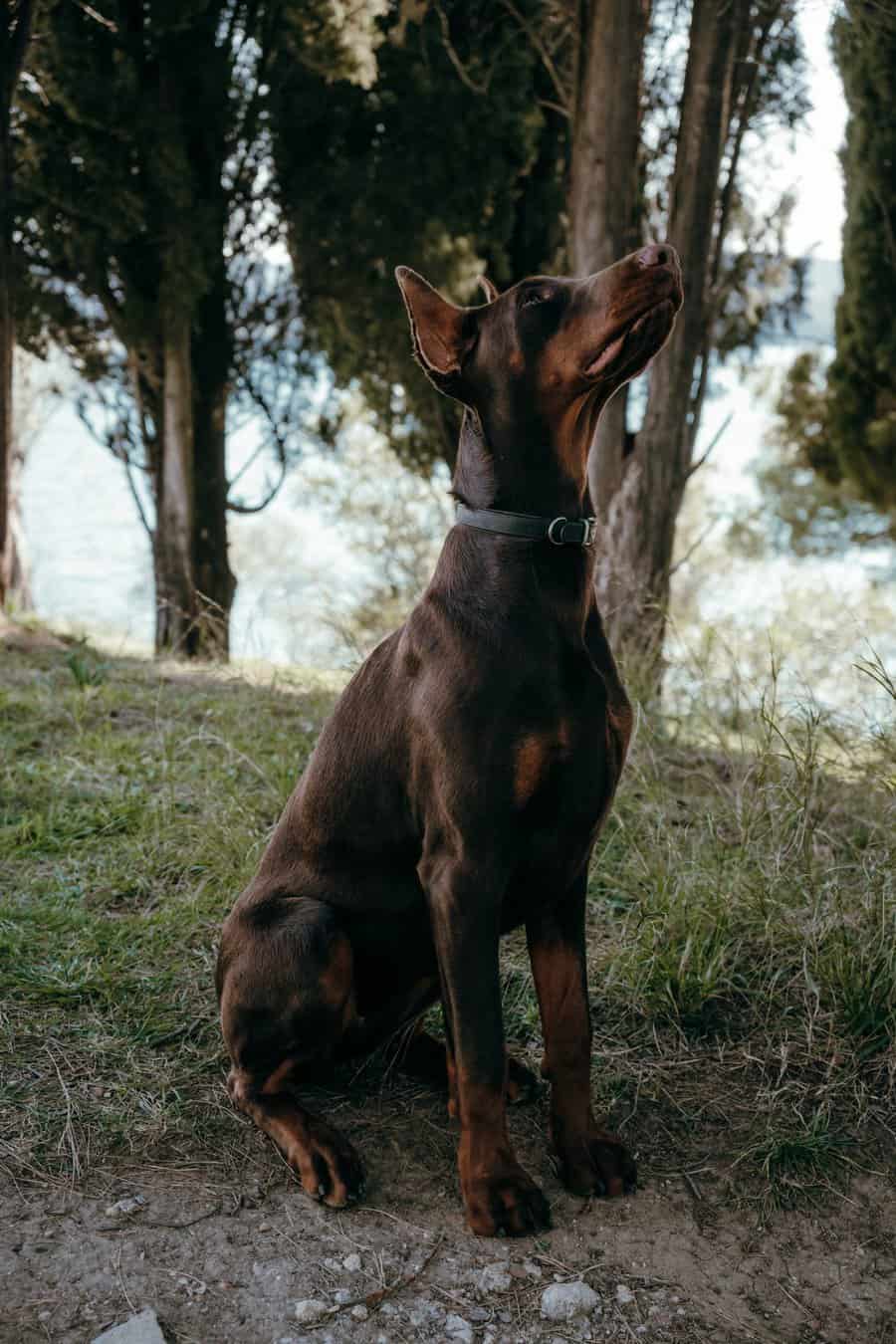 When we hear the term “Doberman”, the sleek, aggressive-looking guard dog with a coat of black and brown will most likely be the first to pop in our heads. In fact, there are five Doberman colors, and chocolate is one of them.

These creatures are truly one-of-a-kind, and their striking appearance is sure to turn heads wherever they go! Although they may be different in color, chocolate Dobermans are just as loyal, loving, and protective as their counterparts in other colors.

This regal breed was originally bred in Germany by Karl Friedrich Louis Dobermann. They were originally used as guard dogs, but today they are known for their loyalty, intelligence, and athleticism. The Doberman Pinscher Club of America was founded in 1908, making it one of the oldest breed specific clubs in existence.

“Black and tan and red are the two most common colors of Dobermans and Doberman Pinschers. Sometimes, the red varieties are also called “chocolate Dobermans”.

These are the most amazing creatures on the planet. They are so loyal and loving, and they make great family dogs. But there is one thing that makes them even more special: their beautiful chocolate color.

Chocolate Doberman puppies are truly a sight to behold. They have a deep, rich brown coat that is absolutely stunning. And their eyes are a deep, dark chocolate brown as well. These puppies are simply gorgeous, and they are sure to turn heads wherever they go.

But it’s not just their looks that make them special; it’s also their personality. Chocolate Dobermans are known for being loyal, loving, and intelligent dogs. They make great family pets and are always up for a game of fetch or a cuddle on the couch.

An adult chocolate Doberman can reach a height of 26 to 28 inches and they can weight anywhere between 60 to 100 pounds. Male Dobermans are usually larger than females. Dobermans have a short, sleek coat that is easy to groom. They are an active breed that needs plenty of exercise. Chocolate Dobermans are loyal, intelligent and protective, making them great family pets.

Different Variants of the Chocolate Doberman

Compared to their American counterparts, European Dobermans are more physically active with a high stamina. This also means they have higher exercise requirements than Doberman Pinschers. So, if you’re a couch potato, the European chocolate Doberman might not be a good breed for you!

Although they look the same for the untrained eye, the American Doberman Pinscher and European Doberman actually have important differences. The Doberman Pinscher is smaller, so it has a more sleek appearance. It is also less active compared to the Dobermann and need less physical activity. The American variant is more suited as house pets or companion animals for the elderly and blind.

The chocolate mini Doberman is a small version of the popular Doberman Pinscher breed. These dogs were originally bred in Germany in the late 1800s, and were used as guard dogs and police dogs. The chocolate mini Doberman is a relatively new breed, and was developed in the United States in the 1990s. These dogs are typically 10-15 pounds lighter than their standard-sized counterparts, and stand about a foot shorter. Chocolate mini Dobermans have all of the same characteristics as their larger cousins: they are intelligent, energetic, and loyal. They make great family pets, but need plenty of exercise and training.

Physical Appearances of the Chocolate Doberman

The Doberman is a famously loyal and protective breed of dog, and the female of the species is no different. Possessing all the same qualities as her male counterpart, the female Doberman is an excellent guard dog and makes a loving companion.

Standing anywhere from 24 to 28 inches tall at the shoulder and weighing in at 60 to 80 pounds, the female Doberman is a commanding presence. Her sleek, muscular body is covered in short, shiny black fur with rust-colored markings on her chest, muzzle, legs, and underparts. But it’s her unique ears—cropped close to her head—that really make her stand out.

Despite her intimidating appearance, the female Doberman is actually quite gentle and loving with those she knows and trusts. She forms strong bonds with her family and is fiercely loyal to them.

The average height for a male Doberman is 26 inches, with some variation depending on the specific bloodline. The tallest recorded Doberman was 32 inches, while the shortest was 20 inches. Generally speaking, taller Dobermans are more likely to be found in North America, while the shorter ones are more popular in Europe.

So what’s it like to own a male Doberman? First of all, you can expect him to be a devoted and loving companion. He’ll want to be by your side as much as possible and will follow you around the house. He’ll also be very protective of you and your family – something that many people find reassuring.

Cropping is a painful and unnecessary procedure that can cause long-term health problems for dogs. It can lead to hearing loss, chronic pain, and infection.

Floppy ear Dobermans are just as cute as their cropped counterparts, and they don’t have to suffer through an unnecessary surgery. If you’re considering a chocolate Doberman, make sure you get one with floppy ears!

The Doberman is a dog breed that is known for its loyalty and protective nature. This breed is also known for its cropped ears and docked tail. The cropped ears are a result of cropping, which is a process where the tips of the ears are removed. Docking is a process where the tail is shortened. Both of these procedures are done for cosmetic purposes and are considered to be controversial.

Dobermans with tails are not as common as those with cropped ears, but they do exist. Some people prefer them because they think it gives the dog a more natural look. Others believe that docking and cropping are necessary to give the Doberman its signature look. Whether or not to crop or dock a Doberman’s tail is a personal decision that should be made by the owner after doing research on the topic.

A chocolate Doberman-Lab mix is a designer dog that is a cross between a Doberman Pinscher and a Labrador Retriever. This pup combines the best features of both breeds, making for an intelligent, friendly, and active companion. The chocolate Lab Doberman mix typically has a short coat that is easy to care for, and comes in a variety of colors including black, brown, and white. These pups are great with children and make excellent family dogs. They need plenty of exercise and are not suitable for apartment living. If you are looking for a devoted friend who will always be by your side, the chocolate Lab-Doberman mix is the perfect dog for you!

The chocolate Doberman-Pitbull mix is a cross between the Doberman Pinscher and the American Pitbull Terrier. This combination results in a powerful, athletic and energetic dog that is also loving and protective of its family.

The Doberman-Pitbull mix inherits some of the best qualities of both parent breeds. They are intelligent and trainable, making them excellent pets for families with children. They are also fiercely loyal and will defend their family against any perceived threat.

The chocolate Doberman-German Shepherd is a mix between the Doberman and the German Shepherd. These dogs are loyal and protective, making them great family pets. They are also intelligent and easily trained. The hybrid is a medium to large size dog, weighing between 60 and 80 pounds. They have a short coat that is easy to care for. These dogs are active and need plenty of exercise. They do well in homes with a yard where they can run and play.

The chocolate Doberman-Husky mix is a hybrid dog that is a cross between a Doberman and a Siberian Husky. This breed of dog is not for everyone, as they require a lot of energy and exercise. They are also known to be very vocal, so if you’re looking for a quiet dog, this isn’t the one for you. However, if you can give them the attention they need, they can make great companions.

The chocolate Doberman-Husky mix is intelligent and easily trained. They are also very loyal to their family and will do anything to please them. These dogs need an owner who is alpha and can provide firm, but loving leadership. Without this type of guidance, they can become destructive and difficult to handle.

The chocolate Doberman is a unique and beautiful breed of dog that is perfect for those who are looking for a loyal and loving companion. They are also great for families with children, as they are gentle and patient. If you are thinking about getting a chocolate Doberman, be sure to do your research and find a reputable breeder.

How rare is a chocolate Doberman? 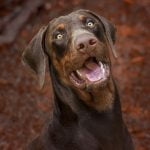 Red or chocolate Dobermans are the second most popular coat color for the breeds, so it not a rare color. However, you shouldn’t make the color the only reason for getting a dog. You should also check their health, lineage, and if their temperament and care requirements are suited for your current lifestyle. 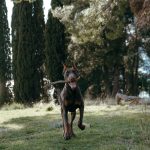 There is a common misconception that chocolate-colored Dobermans are more aggressive than their traditional black-and-tan counterparts. However, there is no scientific evidence to support this claim. In fact, experts believe that the coat color does not have any bearing on a dog’s temperament.
Regardless of their coat color, all Dobermans are intelligent, loyal and protective dogs. They make excellent guard dogs and are always alert and vigilant. With proper training and socialization, they can be gentle and loving family pets.

Can a chocolate Doberman change color? 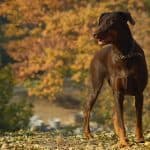 A chocolate Doberman can change color, but it’s not common. The coat of a chocolate Doberman is produced by a gene that’s recessive to the black coat gene. This means that two chocolate parents are necessary to produce a litter of chocolate puppies. However, if one parent is black and one is chocolate, the litter will be a mix of both colors.
While it’s not common, it is possible for a chocolate Doberman to change color. This can happen if the dog has a genetic mutation that affects the production of pigment in the hair follicles. The result is a loss of color in the coat, which can range from lightening of the existing chocolate hue to complete graying or white hair.
If your Doberman’s coat starts to change color, it’s important to talk to your vet.

What are chocolate Lab-Doberman puppies worth? 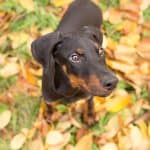 How much does a chocolate Doberman cost? 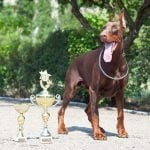