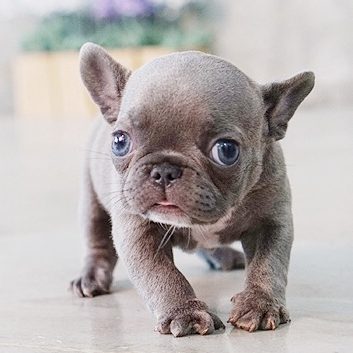 Introduction to the Breed

Due to their small size mini French Bulldogs can be very fragile in nature. That means they need lots of care. If exposed to cold weather, they lose their body heat very fast and have a hard time healing from injuries.

Since they’re of a brachycephalic breed, they have breathing issues at times. More reason they need love and care. These teacup French bulldogs are very popular now, as celebrities and many others are now interested in them. They are extremely gentle, affectionate, and guaranteed to make you smile.

The miniature French bulldogs are said to have originated from England in the 1800s but there are some differing opinions about this. One of the most popular theories is that mini Frenchies were actually taken from England to France by lace workers who went to France to seek greener pastures. Not quite long after this, Parisians noticed these dogs and took a special liking to them due to their small size.

Soon enough, the French started importing these dogs from England. By the mid-1800s, they had lost popularity in England and had become popular in France. Since they were very fashionable, many high society aristocrats, artists and so on bought the dogs.

Another popular theory is that the lace makers who moved to France had bulldogs with them and started to breed them with smaller dogs in order to create a smaller version of the popular English Bulldogs. Over time they achieved the mini size. Parisians fell in love with these little creatures and by the early 20th century, the dogs became popular among the artists, writers, and wealthy Americans who came to Paris. In the mid 20th century, french bulldogs were brought to the US and was officially recognized by the American kennel club in 1988.

What Are Their Visual Characteristics?

Teacup French Bulldogs are known for their wide round grumpy and smooched faces, bat-shaped and alert ears.

Size and Weight of the Teacup French Bulldog

Usually, they’ll have a height between 11 inches to 13 inches tall at the shoulder. A fully grown Mini French Bulldog weighs about 16 – 28 pounds.

How Long Can My Teacup French Bulldog Live?

If you’re buying a teacup French bulldog, you might also want to know, how long will it last? Most of these dogs have a lifespan of 11 – 14 years at most.

Although some can live longer than that, it’s rare and this is due to the numerous health problems that they usually encounter.

What Colors Of Teacup French Bulldogs Are There?

The common colors are brindle, white, fawn or pied. The rare colors are blue, cream, chocolate brindle, sable, blue sable, and pure black. You can check https://porkypaws.com/blogs/dog/french-bulldogs-colors for more information on these colors.

The mini French bulldog as a companion dog is very affectionate and patient. They can at times experience separation anxiety if left alone for too long. Mini French Bulldogs don’t bark too much but they are talkative in nature. They prefer to use yawns, yips, and gargles rather than barking. They only bark when they’re not getting the attention they need. This makes them a perfect choice for pet owners who live in apartments. Mini French Bulldogs have the ability to adapt to whatever place they find themselves in and to whoever treats them right.

You only have to give them the attention they need, play with them, and treat them right. If another person does these things on your behalf, they can easily switch loyalties. They’re funny and lovable. Not only do they make good pets, they also make wonderful baby sitters. They’re very good with kids and families. They’ll keep your kids company when you go out. You can take them on outings, go anywhere with them. They always keep calm and cool.

What Happens When You Leave Your Mini French Dog Alone?

Separation anxiety is one thing that bothers these dogs. They like human contact and are scared of being alone. Before you leave your mini Frenchie at home alone while you go to work, you will want to make sure you’ve kept all your personal belongings in a secure place.

Despite their small size, they can become quite destructive when bored. They’ll chew everything from socks to shoes to books to remotes and every other thing you can think of.

Are They Easy To Train?

Teacup French Bulldogs are not that easy to train. They can be very stubborn and unwilling to socialize, so socialization training is very important.

They are lovable and patient but at the same time, can be aggressive towards people or dogs they’re not familiar with. Vet experts suggest that mini Frenchies should be trained to socialize once they are 14 weeks old.

Yes. They shed but they don’t shed much. Unlike some other dogs, they lose their undercoat during spring and fall. A stripping comb and grooming mitt can be used to remove excess hair during these periods.

Teacup French Bulldogs are not hypoallergenic since they still shed a little. Their hair is also short and tough which makes it easy for dander to get caught in it. So if you have allergies or someone with allergies live with you, the mini French Bulldog is probably not a good idea.

Allergies should be considered before taking in any pet. You surely don’t want to buy a pet you can’t keep, or you have to stay away from.

Mini French Bulldogs Are Expensive. Why?

There are a couple of reasons for the high price. First, the mini French bulldog is in high demand. Second, it is difficult to breed these dogs so there aren’t enough well-bred ones for everyone. The well-bred, rare colored Mini French Bulldogs are in short supply, which drives the prices up.

Why are Teacup French Bulldogs in Short Supply?

These are only a few reasons amidst many others. Considering the feeding expenses, vet bills, and many more expenses, we can understand why mini Frenchies are so expensive.

What Else Should You Know About Your Mini French Bulldogs?

They can’t swim due to their body structure. Their big head and squat frame, makes it difficult for them to float. So if you have a pool, you should keep an eye on your pet. They also cannot fly on an airplane. Due to their brachycephalic nature, they tend to have breathing problems which isn’t good for flying.

As a matter of fact, many airlines have banned them. They can also be emotionally sensitive. If you scold them, they tend to feel bad and then mope around. It’s better to cheer them up, smile and lovingly correct them when needed. They don’t need too much exercise, an average of 15 minutes of walking per day should keep them from becoming overweight.

Remember, when buying, you need to buy from a trusted breeder as many fake breeders are out there desiring to make a profit from this trending opportunity. Also, there are no rarer colors than the colors already mentioned. Runts, premature, malnourished bulldogs are not teacups.

Don’t be deceived. You can check the following sites to buy your teacup French bulldogs.