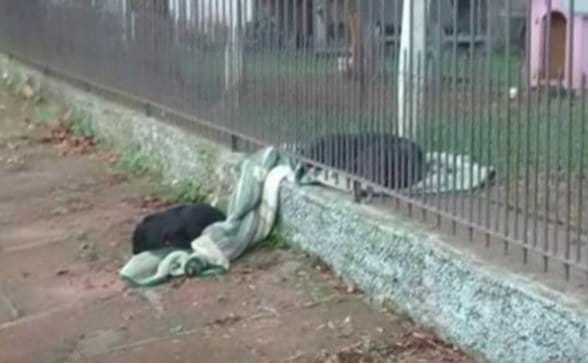 The world can sometimes seem like a terrible place to live in and there always seems to be bad things happening in the news. However, it is important to be reminded that there is kindness in the world and that we have the ability to always look out for one another. It isn’t just humans that can be generous and show love, as an eight-month-old puppy called Lana found out on a cold winter’s day.

Lana is an adorable black dog that was rescued from the streets of Brazil in 2016, along with her siblings. Once they had been saved, it wasn’t long before they began going to their forever homes and Lana was adopted by Suelen Schaumloeffel and her fiancé. Lana settled into her new life quickly and was enjoying all the love she was given. While she had everything that she could have wanted, Lana remembered that not all dogs are able to receive that kind of love.

Contrary to what people may think, it is possible for it to be cold in Brazil and one day it was rather chilly in the region they lived in. Schaumloeffel decided to buy a thick blanket for Lana’s doghouse to make sure that she was warm and comfortable outside the front of their house. When Schaumloeffel had tucked Lana into bed on a cold Monday evening, she wasn’t aware of what would happen afterwards.

Lana decided that she didn’t need all of the blanket to keep herself warm and gave up her comfort for the sake of someone she knew was in need of a little love. When Schaumloeffel’s fiancé woke up the next morning to go to work, he noticed what Lana had done. She had dragged her blanket out of her doghouse and towards the fence surrounding their property to share it with a dog that was living on the street. It’s almost too adorable to believe, but the proof is in the photos.

Schaumloeffel mentioned that she had seen the other dog near their house the day before, but she wasn’t sure whether it was a stray. When she tried to get close to see if it had a dog tag, it ran away in the other direction. However, it seemed Lana had become friends with the stray dog enough to help them out in their time of need.

The blanket had been pulled against the railings, with the stray dog pulling half of it through the gap underneath. In the morning they were both found sleeping on their half of the makeshift bed. Schaumloeffel felt so happy seeing it and said, “I thought, ‘How beautiful what she did for her friend.’ My best four-legged friend reminded me of something so important: generosity.”

Schaumloeffel and her fiancé have seen the stray dog on multiple occasions since the cold morning, but it still runs away every time. While there’s nothing they can do to see if he has a home, they are leaving him fresh water and food for him to enjoy. Schaumloeffel said, “[Lana] is the nicest little dog I’ve ever met. We forget sometimes the difference we can make in someone’s life. She reminded me of this.” Lana acts as a reminder that we can all be a little kinder and help people as much as we can to make the world a better place.