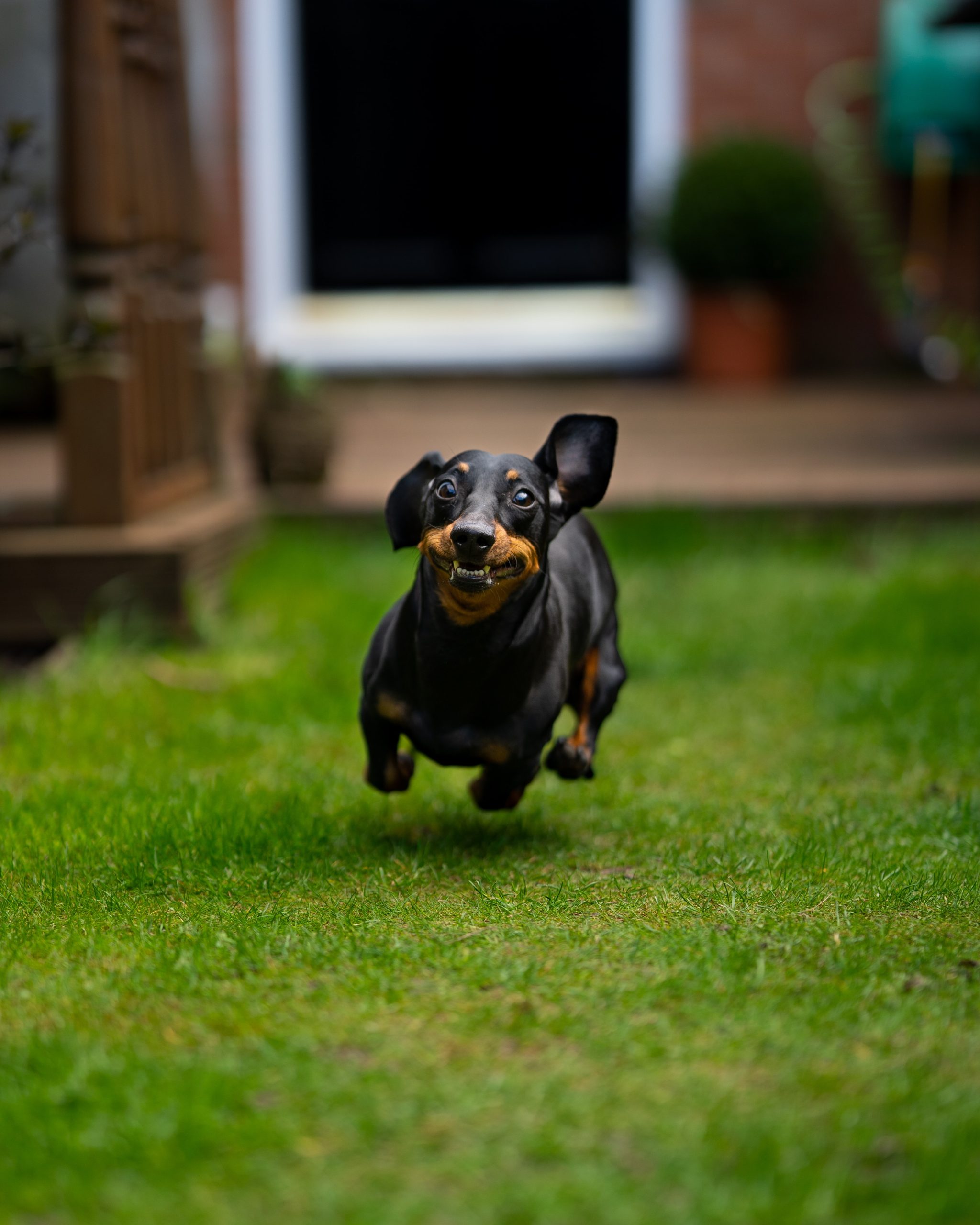 If there were three dog breeds that can make you smile just by the thought of their face, my guess is that one of them is a Dachshund. Who wouldn’t? With its distinctive short legs and long body paired with its lively temperament and clever tactics, these little sausage dogs are such as welcome sight!

Black and tan Dachshunds have become increasingly popular in recent years. These unique-looking dogs are known for their lovable personalities and loyalty to their owners. Whether you’re thinking of adopting from a shelter or getting one from a reputable breeder, here are some things you should know.

Dachshunds were originally bred in Germany in the early 1800s. They were used for hunting purposes and were named after their long, slender bodies which resembled that of a badger. The German word for dachshund is “dackel” or “teckel”.

The Dachshund is known for its short legs and long body that resembles a sausage. The standard size Dachshund was developed to catch the scent, chase, and flush out badgers and other burrow-dwelling animals, while the miniature dachshund was bred to hunt hare. Black and tan dachshunds have a sleek, smooth coat that is black with rust-brown markings on the eyebrows, muzzle, legs, and chest.

If you’re looking for a Dachshund that is sure to stand out in a crowd, the black and tan variety is a great choice. These pups are easily recognizable with their distinctive black and brown markings.

Despite their small size, black and tan Dachshunds are full of energy and personality. They make great companions for active people who enjoy spending time outdoors. When it comes to training, these pups can be stubborn, but they are also intelligent and quick learners.

If you’re considering adding a black and tan Dachshund puppy to your family, be prepared for lots of love (and maybe a little mischief) from your new furry friend!

The miniature Dachshund is a smaller version of the popular black and tan Dachshund. They are just as playful and friendly, but don’t require as much space. Mini Dachshunds are a good choice for people who live in smaller homes or apartments.

Like their larger cousins, mini Dachshunds are active and lively dogs. They love to play fetch and go for walks. They are also known for being intelligent and independent, which can make training them a challenge. But with patience and consistency, most mini Dachshunds will learn basic commands such as sit, stay, and come.

If you’re looking for an adorable dog that will bring some fun into your life, a mini Dachshund may be the perfect pet for you!

Hair of Black and Tan Dachshunds

The black and tan long-haired Dachshund is a unique breed of dog that is prized for its long hair and beautiful coloring. These dogs are loyal companions and make great family pets. They are intelligent and playful, but can also be stubborn at times.

If you are considering adding a long-haired Dachshund to your family, be prepared for lots of shedding! These dogs require regular brushing and grooming to keep their coats looking their best.

Color and Pattern Variations for Black and Tan Dachshunds

If you’re looking for a Dachshund with a unique coat, you may be interested in a dapple. Dapples are born with patches of black and tan on their coat, which can create a mottled or even marble-like appearance. While their coat may be different, they’re just as friendly and lovable as any other Dachshund.

Dapple Dachshunds may have one or two dominant colors in their coat. The most common combination is black and tan, but you may also find dapples with shades of blue, brown, or gray. No matter what their coloring is, dapples are sure to stand out in a crowd.

If you’re thinking about adding a dapple Dachshund to your family, be prepared to brush them regularly.

Like all Dachshunds, piebalds are loyal, loving dogs that make great companions. They are intelligent and active, and love to play fetch and go for walks. They require moderate exercise and plenty of attention from their owners.

Piebald Dachshunds are just as easy to train as other Dachshunds, and are just as eager to please their owners. They respond well to positive reinforcement training methods, such as treats or praise.

Dapple Dachshunds have a unique coat pattern that is made up of light and dark patches. The patches can be any color, but they are usually either black or red. Piebald Dachshunds also have a patchwork coat, but their patches are usually white and another color (usually black or brown).

The brindle Dachshund is one of the most popular varieties of this breed. Brindle Dachshunds have a unique coat pattern that is created by intermingling black and brown hairs. This gives the dog’s coat a beautiful tiger-striped appearance. While the brindle pattern is not as common as the black and tan variety, it is still highly sought after by many dachshund enthusiasts.

Brindle Dachshunds are just as friendly and intelligent as their black and tan cousins. They make great family pets and are very loyal companions. They are also active dogs, so they need plenty of exercise to stay happy and healthy. If you are looking for a beautiful and unique Dachshund, the brindle variety is definitely worth considering!

There are many different color variations of dachshunds, but one of the most striking is the black and tan dachshund with a white chest. This unique coloring is caused by a recessive gene, and it’s relatively rare in the dachshund community. If you’re lucky enough to own one of these special pups, you’ll have a loyal and loving friend for life.

These dogs are just as lively and playful as their counterparts, but their unique coloring sets them apart. Whether you’re looking for a show dog or a family pet, the black and tan dachshund with a white chest is a great choice. Just be prepared for some extra grooming, as their long coats require regular brushing to avoid mats and tangles.

The black and tan Dachshund-Beagle mix is a mix of two popular breeds: the Dachshund and the Beagle. This mix is a friendly, energetic dog that loves to play. They are intelligent and trainable, making them a great choice for families with children. Black and tan Dachshunds are also good watchdogs, as they will bark to alert you of strangers. This mixed breed does best in a home with a backyard, as they need space to run and play.

The black and tan Coonhound-Dachshund is a mix of two popular dog breeds: the Dachshund and the Coonhound. This mix combines the best of both worlds, resulting in a loyal, loving, and playful dog that is great with kids and other pets.

The Dachshund-Lab mix is a cross between a Dachshund and a Labrador Retriever. These dogs typically inherit the best features of both breeds, resulting in a pup that is friendly, energetic, and intelligent. They also tend to be very loyal and make great family pets. Plus, they’re just so darn cute!

If you’re interested in getting a Dachshund-Lab mix, be sure to do your research first.

When it comes to naming their new black and tan Dachshund, many owners choose names based on the dog’s color. Common names for black and tan dachshunds include Oreo, Hershey, and Cocoa. Other popular dachshund names include Max, Duke, and Mia.

Some owners opt for names that are a play on words, such as Shadow or Midnight. Others choose more traditional human names like Benjamin or Abbey. And still others go for completely unique names that have no connection to the dog’s appearance, like Bubbles or Peanut.

No matter what you name your black and tan Dachshund, he is sure to be a lovable addition to your family.

What is a black and tan Dachshund called? 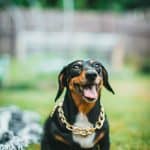 A black and tan Dachshund is a type of Dachshund that has black fur with tan markings. They are also sometimes called “black and cream” or “tan and black” Dachshunds. These dogs are very popular pets, and they make great companions. They are friendly, intelligent, and loving dogs that will bonded closely with their owners.

What makes a Dachshund a dapple?

Are black and tan Dachshunds rare? 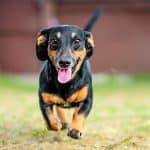 No, black and tan Dachshunds are not rare. They are, in fact, the most common color combination for these adorable and wacky breed. Although the black and tan combo is the most popular for Dachshunds, these lovely furry monsters are definitely not an ordinary breed!

What’s the difference between a dapple and a piebald? 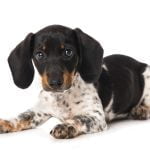 What’s the difference between these two coat patterns? For one, dapples are considered to be more rare than piebalds. Additionally, dapples often have one dominant eye color, while piebalds usually have eyes that are two different colors. Finally, dapples typically have longer noses than piebalds.

How much does a black and tan Dachshund cost? 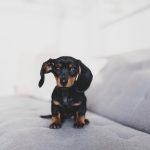 A black and tan Dachshund costs between $500 and $1,500. The price depends on the breeder, the dog’s lineage, and whether the dog is a show quality or pet quality. Black and tan Dachshunds are one of the most popular colors of this breed, so they may be more expensive than other colors.