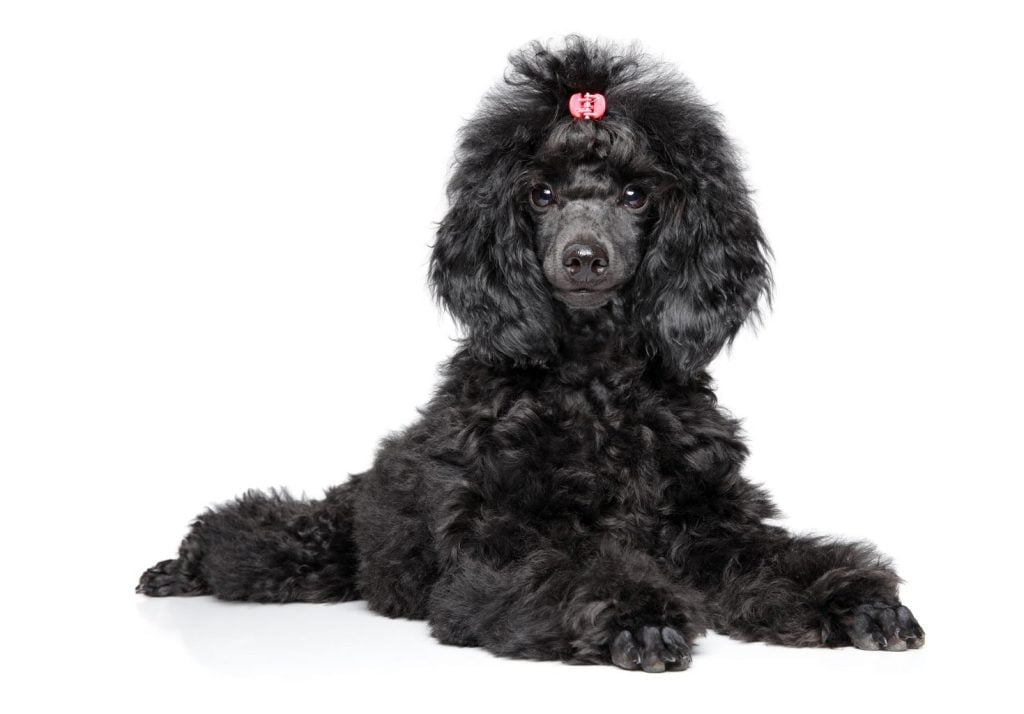 The Poodle is a popular dog breed that comes in many colors. One of the most popular colors is black. Black Poodles are elegant dogs that are often used in shows and competitions. They are also popular family pets.

Black Poodles have a long history. Originally bred in Germany as water dogs, their name comes from the German word “pudel” (“to splash in water”). Bred as hunting dogs, Poodles are excellent swimmers. Poodles were later brought to France where they became popular among the nobility. Black Poodles were particularly popular among French royalty. In the 18th century, Marie Antoinette even had one named Mops.

The black Poodle is a popular breed of dog known for its loyalty and intelligence. The breed originated in France, and the black Poodle is the most popular color of the breed, and they come in three sizes: Standard, Miniature, and Toy.

The breed is also hypoallergenic, which means they do not shed hair, and are therefore ideal for people with allergies.

Today, black Poodles are still popular pets. They are intelligent, loyal, and affectionate dogs. They can make great companion animals for people of all ages.

Poodles are one of the most popular dog breeds worldwide and come in many colors including black. Black Poodle puppies are perhaps the most elegant and regal looking of all the Poodle colors. If you’re thinking of adding a black Poodle puppy to your family, here’s what you need to know.

Black Poodle puppies are just as intelligent and active as other Poodle colors. They make great family dogs and get along well with children and other pets. Black Poodles do require daily exercise and grooming, but this is true of all Poodles regardless of color.

When it comes to personality, black Poodle puppies tend to be calm, dignified, and good natured. They make loyal, affectionate companions and are typically easy to train.

The Teddy Bear Cut is a popular choice for black Poodles, as it gives them a cute, cuddly appearance. This cut involves shaving the dog’s body down to a short length, leaving the head, legs, and tail fluffy. Many people choose to add bows or other accessories to the dog’s fur to further customize their appearance.

Miniature Poodles are the smallest of the three Poodle sizes and they’re perfect for city living. They don’t need a lot of exercise and their small size means they can live in apartments or small homes.

The full grown toy Poodle stand no taller than 10 inches and typically weigh between 6 and 9 pounds. Though they are small in size, Toy Poodles are big on personality. They are intelligent, alert, and obedient, making them great companions.

When it comes to teacup Poodles, there are a few things you should know. First, they are the smallest size of Poodle, and they typically weigh less than six pounds. They are also very intelligent, and they make great companion dogs. They do require regular grooming, however, as their coat can become matted if not brushed regularly. Teacup Poodles are a popular choice for those looking for a small dog that is both intelligent and easy to care for.

Giant Poodles come in all shapes, but they all have one thing in common: they’re big! And with that size comes a lot of responsibility. Giant Poodles require more exercise than their smaller counterparts, and they also need more food to maintain their energy levels.

Poodle owners have come up with all sorts of haircuts for their adorable dogs. The haircuts are often stylish and sophisticated. While Poodles do not require as much grooming as some other breeds, they do need to be brushed and combed regularly to prevent mats and tangles from forming.

There are many different types of Poodle haircuts, from the classic cut to more elaborate styles. The type of haircut you choose for your Poodle will depend on a number of factors, including the dog’s size, coat type, and personal preference. Some common Poodle haircuts include the continental clip, lion clip, puppy clip, and show cut.

The continental clip is the most popular Poodle haircut. It involves shaving the dog’s hindquarters and legs while leaving the hair on the body long.

There are many different mix breeds to choose from, so you’re sure to find one that’s right for you. Some popular choices include the Labradoodle, Goldendoodle, and Cockapoo. Each of these mixes has their own unique personality and set of traits, so be sure to do your research before choosing one.

There are a few different types of Poodle mixes, but one of the most popular is the Poodle Lab mix. This mix combines the best of both worlds – the playful personality of a Poodle with the loyalty and trainability of a Lab.

Labradoodles tend to be medium to large in size, and have a thick, curly coat that sheds very little. Because they inherit the Poodle’s intelligence, they are easy to train and make great family pets. They are also relatively low-maintenance in terms of grooming; a good brushing once or twice a week is all they need.

If you’re looking for a smart, loyal, and fun-loving dog, then a Poodle Lab mix might be the perfect choice for you!

Poodle Terriers are a mixed breed of dog that is a cross between a Poodle and a Yorkshire Terrier. These dogs are known for their intelligence and trainability, as well as their affinity for people. Poodle Terriers make great family pets and are loyal companions.

Although Poodle Terriers are mixed breed dogs, they typically have the best qualities of both Poodles and Terriers. Poodle Terriers are intelligent and easily trained, making them good candidates for obedience and agility training. They also have the high energy level of a Terrier, which means they need plenty of exercise to stay happy and healthy.

Poodle Terriers are generally good-natured dogs that enjoy being around people. They make excellent family pets and are typically very loyal to their owners.

The Chi-poo is a hybrid dog that created by breeding a Poodle with a Chihuahua. These dogs have the best of both worlds, they are intelligent like Poodles and loyal like Chihuahuas. They make great family pets and are very loving.

The American Kennel Club does not recognize this breed, but the International Canine Association does.

The Black Poodle is a Poodle Shih Tzu mix that is becoming increasingly popular. This mixed breed has the best of both worlds – the Poodle’s intelligence and the Shih Tzu’s loyalty. The Black Shihpoo is also known for being affectionate and easy to train.

Poodles can come in combination of colors with black and white combined.

Poodles come in many colors, but the black and tan is one of the most popular.

What is the Rarest Color of Poodle?

There are a few contenders for the title of rarest Poodle color. Apricot is one possibility – this light orange shade is not often seen in poodles. Another possibility is cream, which is similar to apricot but with a white base. Brown Poodles are also quite rare.
So, which is the rarest Poodle color? It’s hard to say for sure, as it depends on what you consider to be “rare”. However, apricot, cream, and brown Poodles are all colors that are not often seen in this popular breed of dog.

What Color Poodle in the Smartest?

According to experts, the black Poodle is the most intelligent of all the Poodle colors. This is because black Poodles have been bred specifically for their intelligence and trainability. They are also the most popular color of Poodle among professional dog trainers.
They can be easily trained to perform a variety of tricks and obedience commands.

It’s a common question from new Poodle owners: can my black Poodle puppy turn silver? Unfortunately, there’s no easy answer. While some eventually turn silver or gray as they age, others simply retain their jet black coat throughout their lives. There’s really no way to predict how your Poodle’s coat will change over time, so you’ll just have to wait and see!

Yes, they can change color. This is because their coat is made up of two colors – black and brown. The brown pigment in their coat fades over time, resulting in a lighter color. Additionally, sunlight can also cause black Poodles to change color.

Is My Poodle Black or Blue?

While there is no definitive answer, there are a few things that can help you determine which color your Poodle is. First, take a look at the shade of your Poodle’s coat in direct sunlight. If the coat appears to be a deep, rich black, then it is probably black. However, if the coat has more of a blue-ish tint to it, then your Poodle is likely to be blue

Some people might say that blue and black are two completely different colors, but when it comes to Poodles, the line between the two shades is often blurred.

How Much Does a Black Poodle Puppy Cost?

How Much Does a Blue Poodle Puppy Cost?