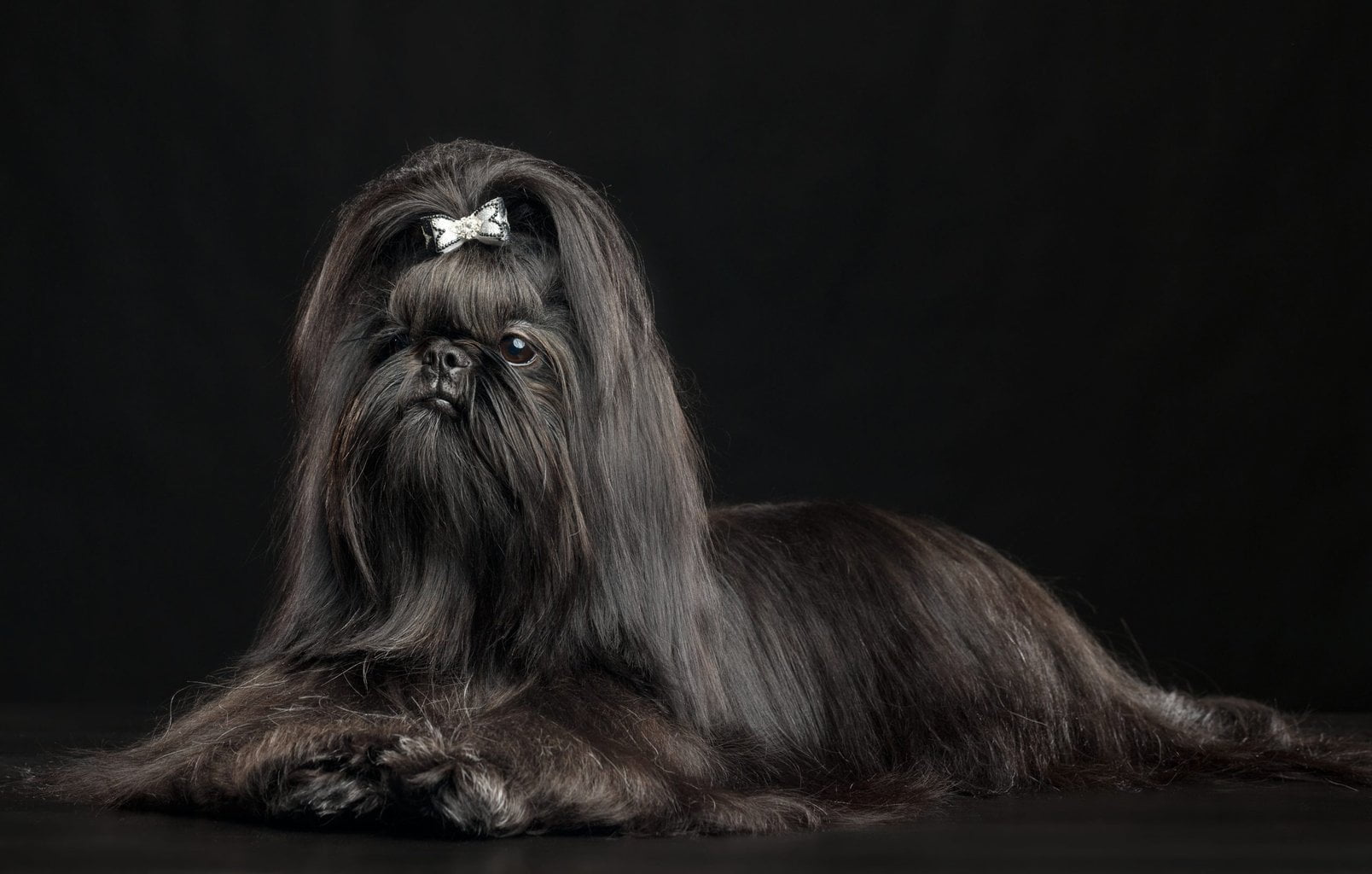 Did a black Shih Tzu catch your heart?

Shih Tzus are known as lap dogs these days, but did you know that this adorable breed started out as the dog of royalty? They were crossbred specifically for the imperial families of China and were barely known to the outside world until the 1930s. These days, anyone can own a Shih Tzu, no matter who they are or where they come from!

If you know much about this adorable dog breed, you likely know that they usually come in a few specific colors. Black Shih Tzus exist, but you might have a difficult time finding one. If you do get the chance to bring a black puppy into your family, know that your new friend is rare and unique!

Known for their compact size, smushed face, and long fur, Shih Tzus tend to have playful, affectionate personalities that make them ideal family pets. They are small, weighing between 9 and 16 lbs at adulthood and standing between 8 and 11 inches.

What Colors are Shih Tzus?

According to the standards set by the American Kennel Club, there are a number of colors and patterns a Shih Tzu may have. They are most commonly white, either pure white or with the addition of markings.

Shih Tzu coloring and color combinations that are officially recognized include:

Is a Black Shih Tzu Rare?

With all these colors, it might not seem particularly special to have a black variation. But these eye-catching dogs are actually difficult to find.

It’s not just the deep color of their coat that makes them so unique. Black Shih Tzus also have an unusual coat texture that requires special grooming. This long, coarse fur is much more similar to human hair than most dog fur.

What makes a black Shih Tzu is complicated, but it basically involves three alleles. Each of these is responsible for a pigment combination in a dog’s fur — dominant color, brindle, and recessive non-black. A pure black results by correctly “programming” each gene for dominant black without brindling or markings.

Even if you do find a black one, it is even more rare to find one that is truly solid black, with no other markings. Most black Shih Tzus have sporadic markings, often streaks of white on their chest, back, belly, or paws.

For most people, this isn’t going to matter much. But if you plan on showing your little furry friend as a solid black dog, the American Kennel Club demands that the pup be completely black, including around their eyes, nose, and paw pads.

There are many black Shih Tzu variations. While some of these are rarer than others, each of these is a beautiful dog that will make a wonderful addition to your family.

A pure black Shih Tzu is one with a solid coat with no variations in the fur or markings of any kind. According to AKC standards, this includes no markings on the nose, eye rims, or paw pads. Their unique, coarse coats will grow as long as you let them, which means that they require regular grooming, just like other Shih Tzus.

The black and white Shih Tzu might look like a white dog with black patches, but they are actually the opposite. Though the majority of their fur is white, their genetics are determined by dominant black pigments. This type of coloring falls into three subcategories:

Brindle is a coat pattern where the main fur color is streaked or striped with other colors. This creates a beautiful visual effect that almost looks like waves of color. Black brindle Shih Tzus may have variations of liver, white, gold, or silver in their fur. There are many types of brindling, including:

Brown is not an officially recognized Shih Tzu coat color — instead, it is classified as liver. Nevertheless, black and liver Shih Tzus do occur. These usually have a mostly black coat with liver patches of markings, but also have a black nose, eye rims, and paw pads. Alternatively, solid liver Shih Tzu may have red, brown, or pink on these areas.

There are three officially recognized tri-color patterns that include black. The ratio of each color may be completely different from animal to animal. For example, a dog classified as black, gold, and white may have 10 percent black coloring or 70 percent.

Other tri-color Shih Tzu types include:

A Shih Tzu of any color may have sporadic black markings on its coat, often seen on the forehead, chest, shoulders or back, tail, or paws.

A Shih Tzu of any color may also have a black mask. As the name implies, this refers to markings on the face, typically covering the eyes, nose, and muzzle.

How Much Does It Cost?

Shih Tzus are generally considered purebred dogs, so you can expect to pay more than you would for a mixed breed that your local animal shelter. But when it comes to black Shih Tzus, we are on another plane of expense altogether.

That is because pure black Shih Tzus are quite rare. Their striking fur makes them desirable, as does the rarity of the coat presentation. In general, you can probably expect to shell out between $500 and $1,500 for any Shih Tzu dog. Other estimates put starting costs at around $850 and up to $1600.

A pure black Shih Tzu will be significantly more, and a purebred with a pedigree will very likely cost thousands of dollars. Other more specialized breeds such as a black teacup will be similarly expensive.

This, of course, is all the initial cost of buying a puppy. Shih Tzus are unusually expensive dogs to care for, so you will need to take all of this into account before you make your purchase. On average, you can expect to pay about $2,570 during your dog’s first year of life and $1,180 for every year after that, for a grand total of $17,910 over the course of your dog’s life.

So why are these dogs so expensive? Shih Tzus are unusually pricey dogs not only to procure but also to care for. These costs are tabulated based on the unique needs of this breed, which will include:

Of course, not everyone will have all of these costs — these are just an estimate, so they may not be exact for you and your family. Grooming can be a particularly big expense with these dogs, as they don’t shed (which means they are also hypoallergenic!) but have an extraordinarily thick double coat. You will need to maintain their fur meticulously to enjoy that they stay healthy and cool — and these grooming appointments can get expensive very quickly.

Beware of unethical breeders and puppy mills if you are planning on buying a pure black Shih Tzu puppy. Always adopt from a trustworthy source, such as Shih Tzu Rescue or the American Shih Tzu Club.

What Type of Mixed Breeds are There?

Like almost any other dog breed, black shih tzus can and do crossbreed with other dogs. Additionally, two shih tzus of different colors may also mate, resulting in mixes of coat patterns, colors, and other characteristics.

You may have heard stories about black Shih Tzus’ coats changing color. This is actually fairly common, especially as puppies mature into adults. Often, puppies that are born with what seems to be a solid black coat turn a dark brown color as they grow.

Because brown is not an officially recognized coat color for the breed, these puppies are actually some variation of black or liver, possibly with brindling. If you have your heart set on a black Shih Tzu, you may want to wait until your puppy has reached maturity and you know what color his or her coat will be in adulthood.

Of course, once a Shih Tzu has reached maturity, its coat will no longer change color. At this point, a pure black Shih Tzu will remain pure black throughout its life.

It is quite common for Shih Tzu dogs to change color throughout their first year. Not only can their coat color change, but brindling may appear and markings may grow and change. Quite often, someone adopts a Shih Tzu puppy and gets surprised to see its white coat turning silver or a black coat turning to liver.

However, it is not likely that a pure black will turn fully white — this kind of color change is too extreme. What may happen, however, is that a black one with white markings may have their markings grow or move as they get older, becoming more noticeable with time.

By the time your Shih Tzu puppy is a year old, it should have its final coat color and you can expect it to remain this way for the rest of its adult life.

A Shih Tzu can be a challenging and expensive pet, but those who own them may say that their sweet and loving personality and above-average intelligence is worth the effort. If you decide a black Shih Tzu is right for your family, you will have a friend for life (and if you are looking for black Shih Tzu names, check out some ideas here!).