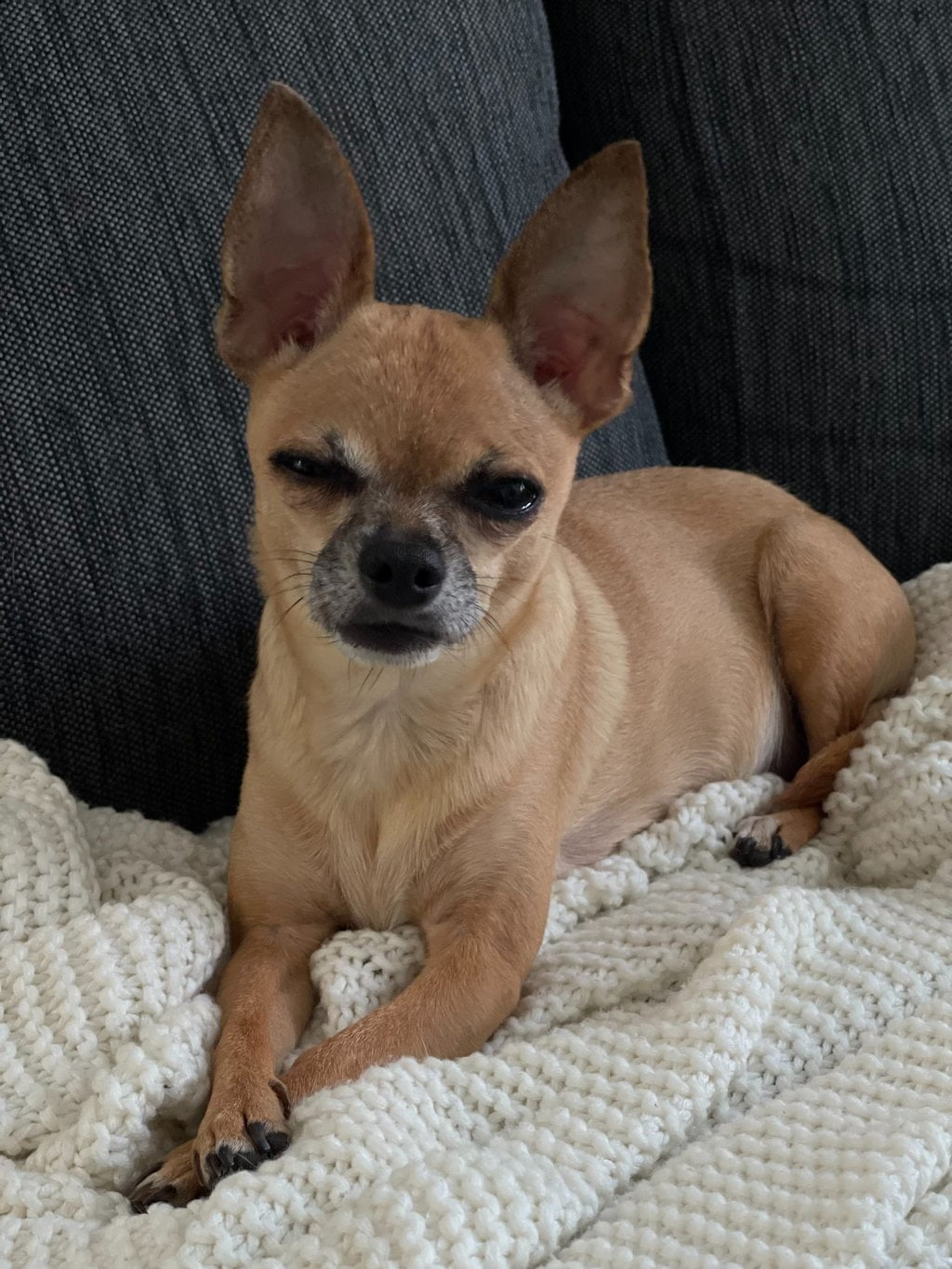 The mighty Chihuahua! Whether you believe they’re a European import or a Mexican Techichi descendant, we can agree that great things come in small packages when it comes to this breed. No other breed comes in so many different colors and patterns. The American Kennel Club (AKC) breed standard lists them as “any color—solid, marked, or splashed”. These dogs come in a wide array of shades and one of the top five is the fawn Chihuahua. Here are colors, transformations, possible prices and more about this lovable “little deer”.

Black, chocolate, red, cream, and fawn are the top five colors for Chihuahuas. Black is genetically dominant, but fawn may be the shade most often associated with this breed. (Trivia: fawn is actually a set of shades since it can range from a pale buff to the nearly red.) However, like black, fawn is relatively rare as a solid shade. It’s more likely to appear along with other colors. The fawn and white Chihuahua is a common combination. Fawn also comes in other combinations, like the striking fawn black sable Chihuahua.

Actually, color has no relationship to the coat: the fawn Chihuahuas with long hair are just as common as those with smooth hair. Known previously as a “little yellow dog” and now as “little deer”, the fawn Chihuahua often has many characteristics that make it an iconic darling.

Picture a Chihuahua: do you see “a well-rounded, apple-domed head”? That’s a key feature according to the AKC’s breed standard. But that may not be what most people see as the epitome of the breed: the fawn deer head Chihuahua.

Instead of the fawn apple head Chihuahua (a much more common combination), you might imagine the long nose, wide eyes, flattened skull, and V-shaped face – features commonly associated with the deer head Chihuahua. Although not preferred by the show community, this type is a favorite among breeders and pet lovers.

For one thing, the fawn deer head size is different, a feature which makes it stand out from the pack. They typically stand at eight to 12 inches and weigh in at about 10 pounds. That’s nearly twice the weight of their apple head pals! In fact, the fawn deer head – which typically has longer legs and fewer health problems – is different enough that some have argued for it to be its own distinct breed.

Chihuahuas are already a small breed. Of course, this hasn’t stopped breeders from producing the even smaller teacup fawn Chihuahua. Like all Chis, these little fellows are big dogs in a small body. Sadly, unlike some breeds, the teacup Chihuahua isn’t a recognized type and may be engineered unethically.

These “teacup” Chihuahuas may simply be dogs born smaller and weaker who will grow up with additional difficulties. Thank Paris Hilton for that one: the 90s starlet carried a teacup Chihuahua with her everywhere, creating a demand among imitators.

What is the rarest color of Chihuahuas? For a breed that comes in so many shades, it’s hard to name just one. Among the rarest of colors is the blue fawn Chihuahua. The blue color comes from an unlikely combination of recessive genes that amount to a dilution of black to a blue-gray color.

However, the parents’ colors are in fact no guarantee that their offspring will be blue. Moreover, even breeding two blue Chihuahuas won’t necessarily produce a blue litter because of the recessive gene. But breeders agree that interbreeding blue Chis is likely to produce more health problems due to the combination of recessive genes.

If blue results from manipulation of the dominant black genes, the fabled lilac fawn Chihuahua is actually a diluted version of the chocolate or dark brown coated Chihuahua. However, that’s where the similarity ends. Chis with brown noses and amber eyes carry the recessive lilac gene, making them easier to breed and less prone to problems than blues.

The opposite is true of fawn merle Chihuahuas. Merle, or “dappled” as it’s called in some breeds, is a coat pattern that accompanies other genetic variations. That’s why it’s referred to as a “gene modifier” that affects the expression of other genes. For example, merle Chihuahuas may have unusual blue eyes or differences in skin pigmentation (as well as coat color).

Unfortunately, merle Chis also often have hearing and vision problems. What makes for a beautiful coat also makes them prone to sunburns and even skin cancer. This led the Chihuahua Club of America to issue an ethics statement regarding the merle variation! Yet, this doesn’t stop some sellers from charging more and saying less about the challenges of these types. Remember this when you’re shopping for a Chihuahua puppy.

Because of high demand, fawn Chihuahua puppies and their variations don’t come cheap. Expect to pay from $400 to $1200 for each of your Chi babies, and prepare for regular vet visits to keep them safe and healthy.

On the bright side, their diminutive size makes caring for an even the larger fawn dear head Chihuahua puppy affordable. A growing dog will thrive on dry kibble (its rough texture keeps their tiny teeth clean!) and needs only about 40 calories per pound of body weight each day. That’s about  ¼ to ¾ cup a day, divided into two to three meals. What a steal!

Expect your Chi pup to be feisty, affectionate, and above all, loyal. There’s a reason the AKC lists these dogs as “charming, graceful, and sassy”: Chihuahuas have a lot of personality, as their owners already know. This is especially true of Chi mixes. A common cross is the Chihuahua Terrier mix, a combination that produces an even more energetic puppy! (Is that even possible, you ask? Yes… yes, it is!)

Chi-Terriers are alert and curious like their Chihuahua counterparts, but also bold and hardy like their Terrier ancestors. This makes for a mix that is among the healthiest of small dogs, often living for 15-17 years without incident. Just keep a close eye on them when others are around: their small size and delicate features make them more vulnerable to injury than to illness.

Can a fawn Chihuahua change colors? 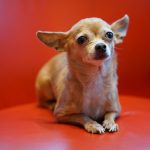 Like other breeds, all Chihuahuas start out with a “puppy coat” of soft fine fur that typically transitions to an adult coat within the first 18 months. Fawn Chihuahuas won’t turn into black ones, but they may grow darker with age or mature into more color combinations. For example, fawn black sable Chihuahuas are buff to reddish with black tips on their hairs, creating a beautiful Ombre effect. If a sudden color change happens after the puppy phase, it’s a sign of a more severe problem and needs immediate veterinary attention.

What is the rarest color in Chihuahuas? 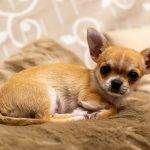 Not fawn – that’s one of the most common! No, the rarest color is an all-white Chihuahua, a color that only occurs in two ways. One is albinism, a complete lack of pigmentation that results white fur and pale skin with red eyes. The other comes from a lack of melanocytes without a loss of eumelanin in the skin: the Chi will have white fur but a black nose and eyes like most other dogs.

Which Chihuahua color is the smartest? 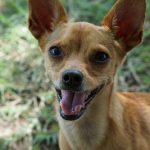 Chihuahuas have the largest brain to body size ratio of any breed. Yet, according to psychologist Stanley Cohen, Chihuahuas rank 125th in intelligence out of 138 breeds. This proves that brain size has nothing to do with intelligence. Intelligence also has nothing to do with coat color: rare white, blue, and lilac Chihuahuas have no advantages over their more common counterparts, and the fawn deer head Chi may be just as smart as a breed standard apple-domed fawn black sable Chihuahua.
They may not be the smartest dog in the pack, but what they lack in intellect, Chihuahuas make up for in empathy. According to the AKC, Chihuahuas are curious, compassionate, and eager to please. They form a strong protective bond with their dog families. Like people, they should be judged by their hearts and not their intellect… or the color of their coat!