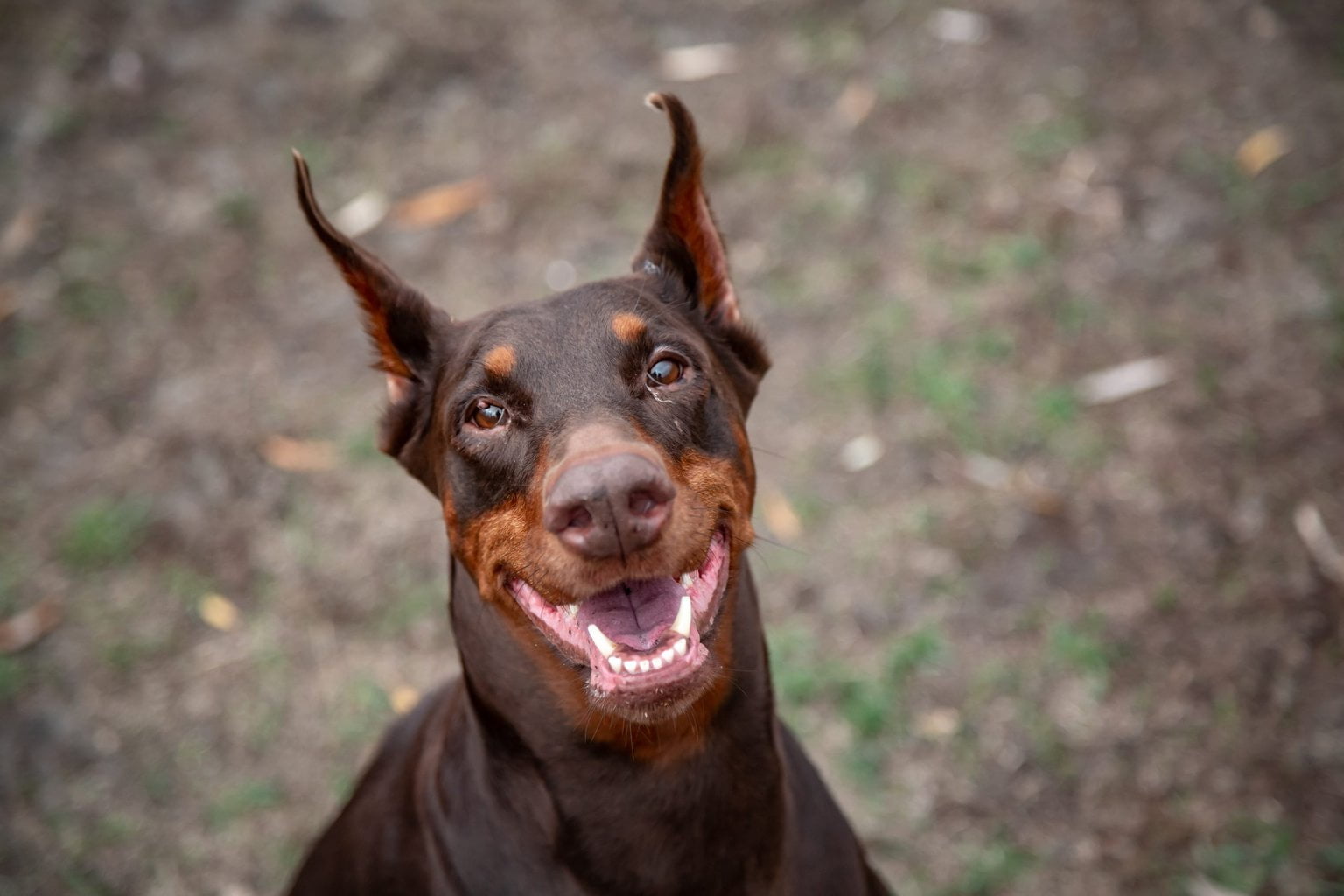 The red Doberman is a beautiful, lively dog. Loyal and intelligent, red is the second most popular color at this time. (Most fans of the German breed favor the more common black and tan coat.)

Per the American Kennel Club breed standard, red Dobermans are compact, measuring between 24 and 28 inches to the shoulder. The AKC also describes Dobermans as “regal” and “sleek.” Red is an AKC-allowable color, so if your dog otherwise qualifies, your Dobie could become AKC registered.

Generally, black and red Dobermans are considered the healthiest. Other breed coats, such as white, can result in genetic problems.

How Rare is a Red Doberman?

Red Dobermans aren’t as easy to intentionally breed as some of the other colors. As with humans, the red fur (hair) color gene is recessive, meaning both parents need to carry the red gene for red puppies to be possible. That said, red Dobermans aren’t particularly difficult to find, but always ensure you are able to purchase from a reputable breeder.

Red Dobermans are not more aggressive than other colors. In fact, they’re known as being more playful than others, but so far there is no gene or other scientific evidence tied to that statement. It’s simply a known among the Doberman community. If you’re interested in personal safety and protection, however, a red Doberman can still do the job efficiently. It might be more suited to family life than other color Dobermans.

Can a Red Doberman Change Color?

All puppies have the potential to possess a darker coat than their adult coat will be. This is especially true with fawn-colored dogs. Some pups, including red Dobermans, can change up to three times in color before the dog reaches a year of age. Just as some humans can have their hair turn redder or more blonde in the sun, Dobermans of all types may take a more reddish sheen if they’re out in the sun a lot.

How Long Do Red Dobermans Live?

Red Doberman Pinschers have a typical lifespan of 10-12 years, which is about average for breeds of their size. to keep your Dobie healthy, you’ll want to take them to the vet as often as recommended and ensure they get all their shots. The oldest Doberman pinscher lived to the ripe old dog age of 22. That’s 154 human years! Health-wise, you’ll be happy to know that red Dobermans do better in the sun than Dobermans of other coat variations.

How Much Do Red Dobermans Cost?

Red Dobermans cost between $1,500 and $2,500 from reputable breeders in the United States. Prices per litter may vary, especially if there is only one red female or red male in the litter. The same is true for pricing a black and red or a fawn and red.

If you’d like to get a red Doberman with uncropped (floppy) ears or with a tail, notify your prospective breeder immediately to prevent cropping. Typically, you’ll be asked to place a deposit on the dog at that point in time and/or when the dog is at least two weeks of age.

Unfortunately, breed-specific legislation (BSL) has Dobermans banned in many localities and individual communities or apartment complexes. Make sure you can legally house a Doberman and check with your insurance company before considering a red Dobie puppy.

What are Popular Red Doberman Mixes to Consider?

The red Doberman in full grown or puppy form is a treasure, and naturally make for fantastic mixes. Popular mixes include:

The red mini Doberman is also a popular choice for those who like red Dobermans but don’t want a full-size Dobie. People opt for the red mini Doberman for a variety of reasons, including lack of yard space, apartment lifestyle, or because they simply want a more manageable dog that produces less waste.

While these mixed breed dogs are popular and lovable, it is impossible to tell what an adult mixed breed dog will look like from its puppy features the same way that you could with a purebred red Doberman, as you’re mixing two dogs with different breed standards. This creates a greater variety of unpredictable traits – but if you’re open to a bit of a surprise, that can be especially fun. Remember: a mixed breed dog is every bit as valuable, worthy, and lovable as a purebred. They may even suit the needs of your family or climate better.

What Are Some Good Red Doberman Names?

Red Dobermans are fun to name! You can select the name of one of your favorite, most regal and heroic characters, or give a nod to the dog’s lovely red color. Here are a few suggestions based on coat color:

Because of the Doberman’s reputation, many owners consider it funny to name their playful Dobie something cute like “Buttercup”.

All Doberman Pinschers are German in origin, so you could also consider a German name to honor the dog’s heritage.

They are fantastic family companions, guard dogs, and pets. If personal safety, loyalty, and trust are high priorities when it comes to a dog, the red Doberman Pinscher may be the right dog for you and your family. They have the potential to be kind, affectionate, empathetic animals, and they love being around their people. Some Dobies prefer just one person, but if the dog is raised in an environment with children, they will likely consider each child a beloved companion.

They do guard naturally. Special guard dog training is not recommended as there is no need to further aggression in a breed that naturally protects. If you socialize your dog early, the red Doberman Pinscher could make an irreplaceable member of your family and existing pack.