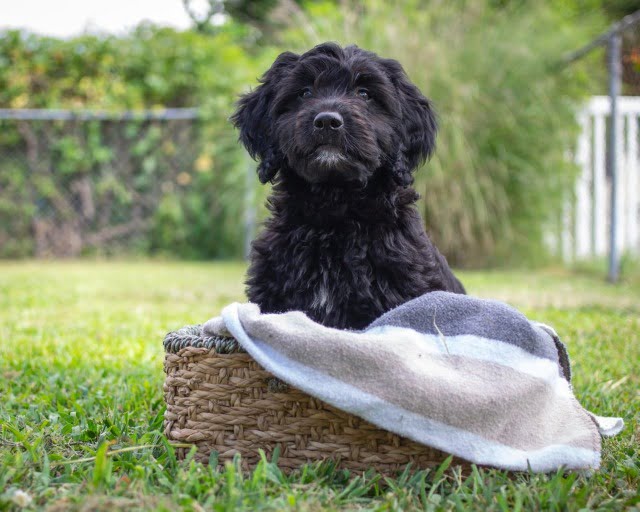 A good place to start when getting a pet dog is by looking into the type of breed you’d want. You’ll choose ones that have the right temperament and the right needs that fit your lifestyle. But what if you find your perfect breed, only for it to have that one trait you just can’t tolerate? A Husky for example has a great personality, but it’s just too energetic for the indoor life. On the other hand, the Dachshund is perfect for apartment life. They are very friendly, but they can’t really catch up to you if you like taking long jogs.

The answer to this, my friends, are designer breeds. Basically, designer breeds are dogs that were made by crossbreeding two purebred parents. One of the most famous and most beloved among the designer breeds is the Black Goldendoodle. The other extremely popular designer dog is the Pomeranian Husky mix (aka Pomsky).

The Black Goldendoodle is a combination of a pure Golden Retriever and the Standard Poodle. They have the best of both world in terms of looks, personality, and intelligence. The fact that it doesn’t shed, is an added bonus. The black Goldendoodle ticks all the right boxes if you’re looking for a nice dog breed.

The Black Goldendoodle is definitely a great breed, but if you need more convincing, we’ve summarized everything there is to know about this lovely animal.

Depending on which trait is more dominant, the Black Goldendoodle comes at a variety of coats. Each kind on coat come with their own specific grooming needs and each with a unique look to them. Do keep in mind, however, that it can be hard to check what coat Goldendoodles will have if they’re still puppies.

The straight coat, despite its more mundane look, is actually a lot rarer than the curly or the shaggy versions. Black Goldendoodles get this coat if they have predominantly Golden Retriever genes. Though they don’t have the famous teddy bear looks the other coat types, they do require much less fur maintenance. Goldendoodles with this coat typically only need a weekly brushing.

The shaggy coat is known to be the most common amongst Black Goldendoodles. This coat is thought to be one of the easiest to maintain. They’ll need weekly brushing, and shedding is basically non-existent.

This type of coat is characterized by the curls. Each curl varies greatly on tightness and length depending on their lineage. You can have anything from a loose barrel curl to ones that you’d see from the purebred Standard Poodle. This coat type will need to be brushed daily so you won’t get matting. If you don’t have time for that though, you can always keep the fur cut short. Despite this, however, they almost always never shed.

Where the Black Coloration Comes From

Black Goldendoodles vary in size depending on which of their heritage is more dominant. You could call the Goldendoodle a medium dog breed. The standard males tend to be bigger, at around 24 inches tall at the shoulders, and females at around 22 inches. The typical black Goldendoodle weighs between 30 to 45 pounds.

While Goldendoodles come at a variety of colors, Black Goldendoodles predominantly get their black coat from the Poodle side of the family. The Poodle bloodline also produces more muted colors like chocolate or dark brown, and silver or gray. So, if your Goldendoodle is black, dark brown or gray, chances are that it’s more Poodle than Golden Retriever.

One thing to note about the black coloration – sometimes the black coat of a puppy can turn gray when the Goldendoodle is fully grown:

Typical Size of The Black Goldendoodle

They do come in three different variants, however, with miniatures weighing in at 15 to 30 pounds, medium at between 30 to 45 pounds and the large standard that can weigh as much as 100 pounds.

Like everything else about them, there’s no way of getting a fixed weight out of the Black Goldendoodle. This is due to the many possible combinations of bloodlines in them.

A full grown black Goldendoodle is typically 20 to 24 inches and typically weigh between 50 to 90 pounds. In terms of coloration black goldendoodles stay black, but may lighten over time.

Price of Goldendoodles varies based on the coat, the size and the color of the Goldendoodle. The black coat is one of the most sought after and they typically cost between $1500 and $2000.

The Black Goldendoodle, and Goldendoodles, in general, have become popular for a lot of good reasons. They’re the perfect companion dog and can be an endearing part of the family, without having most of the negative aspects of keeping either of its purebred parents. They’re a type of breed that that enjoys human company. Black Goldendoodles are patient and gentle, which makes them perfect with kids. Sometimes they can be a bit mischievous during playtime, but the proper training will generally keep them well-mannered.

Having other puppies around, or at least one of its parents will make sure that they learn how to socialize early on. It is good to introduce them to friends at an early age, so they don’t get too angsty whenever they meet strangers. Going on walks with them to the park or other places with new people and dogs will make sure they grow up to be well-adjusted adults. Having them meet new people and socializing a lot at a young age also has another set of benefits. These dogs tend to suffer from the lack of social interaction, especially with separation anxiety, which will eventually lead to the Black Goldendoodle being ornery and destructive.

Sometimes, though, it can be hard to be 100% sure of how a dog’s personality will turn out, since most of its temperament is based on how much Golden Retriever or Poodle is in their genes. What you can be sure about them though is that they’re easy to train and they’re eager to please their owners, which is the perfect combination if you want to teach them tricks or at the very least, teach them manners. Positive reinforcement works well with these animals and can be used to correct any bad habits they’re bound to show as they grow up.

Much like we’ve mentioned before, the Goldendoodle’s grooming needs are based mostly on the type of coat they have. Some coats will need constant brushing, and some don’t. The straight and the shaggy variants need only weekly brushing, while the curly version needs a good brushing every day. What is standard in all Goldendoodles is the fact that they almost never shed their fur, even the furriest of them. For the ones that do shed, keeping their fur nice and short is more than enough to manage their shedding.

The lack of shedding makes them a dream if you hate cleaning up after dog hair. Some variants of the Goldendoodle also have hypoallergenic hair, which means that there’s less of a chance of you getting allergies from burying your face into them.

What makes the F1B Goldendoodle special is out of all the Goldendoodle generations available out there, they are the most hypo-allergenic, which is great if you have someone in the family who’s severely allergic to dog fur. Although this generation of Goldendoodle is 75% Poodle, that doesn’t actually mean that they look more like Poodles or act more like Poodles than anything else. The 75% Poodle gene mostly just affects how much they shed or their famed hypo-allergenic properties.

F1B Goldendoodles tend to have curly or shaggy hair and are prone to matting, so make sure that you give them a proper brushing to prevent this.

Aside from having a Goldendoodle that has solid colors of one color only, it’s possible to get multi-colored variants as well, where they are born with a combination of at least two colors or the same colors with different shades.

Final Thoughts – Is the Black Goldendoodle Right for You?

Now that you know most of what there is to know about Black Goldendoodles, you should start asking yourself: is it the right breed for you? Let’s assume that you’re willing to take care of the basic needs any dog will need, like exercise, regular grooming, food, and proper training. If that’s the case, you’ll only need to add a bit more into the mix to be able to call yourself a good owner for this dog, like extra exercise and extra space. The Black Goldendoodle can be a handful if you’re not careful, but let’s be honest, what dog breed isn’t? Just give it enough love and make sure you meet its basic needs, and any dog will be the right one for you, and yes, that includes Black Goldendoodles!

PS. If you are considering becoming a dog parent for the very first time, some dog breeds may be better than others for you. If that is the case, check out these breed recommendations: