Pomeranians are a small, fluffy breed of dog that originates from Pomerania, a region in northern Poland and Germany. The Pomeranian is the smallest member of the Spitz family of dogs, which also includes breeds such as the Samoyed and the Husky. Although they come in many different colors, black and white Pomeranians are some of the most popular.

Pomeranians are known for being intelligent, alert, and active dogs. They are also very loyal and loving companions.

Surprisingly, Pomeranians were originally bred in Germany as working dogs. They were used to herd sheep and pull carts. Pomeranians were brought to England in the late 1800s, where they gained popularity as companion dogs. Queen Victoria was a big fan of the breed and helped to make them fashionable.

Today, Pomeranians are still popular companion dogs. They make great lapdogs and love to be pampered. Pomeranians are also very intelligent and can be trained to do tricks and obedience tasks.

If you’re looking for a Pomeranian puppy, be sure to find a reputable breeder. Pomeranians are prone to health problems, so it’s important to make sure your puppy comes from a good bloodline. Be prepared to pay between $500 and $1,500 for a healthy Pomeranian puppy.

Pomeranians are bred in a variety of colors, including black and white. While most black and white Pomeranians have one color predominately on their body with the other color around their face and legs, there are some that are truly half black and half white.

The Pomeranian’s thick double coat can make daily grooming a must. If you are considering adding a Pomeranian to your family, be prepared to spend at least 10 minutes a day brushing your Pom’s fur.

Teacup Pomeranians are very attached to their owners and love to be pampered. They are also one of the most vocal dog breeds, known for their high-pitched barks. Like all dogs, teacup Pomeranians need plenty of exercise and socialization. They can be prone to separation anxiety if left alone for too long.

Teacup Pomeranians require special care due to their small size.

The spotted Pomeranian is a unique and beautiful variation of the popular Pomeranian breed. These dogs are characterized by their coat, which is primarily white with black spots.

This hybrid breed has many of the best qualities of both parent breeds. They are outgoing and friendly like Pomeranians, but also alert and quick to sound the alarm like Chihuahuas. The Pomeranian-Chihuahua mix is an excellent watch dog despite their small size. They will bark at any strangers that come near their home or family.

The Pomeranian-Chihuahua mix is a healthy breed with few health problems.

The Pomeranian Shih Tzu mix is a unique and interesting crossbreed. The combination of these two popular breeds results in a dog that is small, affectionate, and intelligent. This mix is an excellent choice for families with children or seniors looking for a loving companion.

The Pomeranian Shih Tzu mix is a relatively new crossbreed, so there isn’t a lot of information available about them. However, we do know that they inherit the best traits from both parent breeds. Pomeranians are known for their intelligence and playfulness, while Shih Tzus are known for being devoted and affectionate companions.

This combination results in a dog that is smart, loving, and good natured. They are also relatively easy to train and make excellent family pets.

Papillion Pomeranian mixes are some of the most adorable dogs you will ever see. They are a mix of two popular breeds, the Papillion and the Pomeranian. These dogs are small, but they are full of personality. They are loving and affectionate, and they love to play.

Papillion Pomeranian mixes make great companion animals. They do well in families with children and other pets. They are also relatively easy to train. These dogs are intelligent and eager to please their owners.

If you are looking for a small dog with a big personality, then a Papillion Pomeranian mix is the perfect dog for you!

A Black and White Pomeranian Poodle mix is called a Pomapoo. This is a beautiful cross between these two popular breeds. This mixed breed inherits many of the best qualities from both parent breeds.

The Pomeranian Maltese mix is an active little dog that loves to play and has a great sense of humor. They are very affectionate with their family and friends and make excellent lap dogs. They do well in apartments or homes with small yards since they don’t require much exercise.

This hybrid breed does not bark much, but they do need daily brushing to prevent mats from forming in their long coat. The Pomeranian Maltese mix is a people-oriented dog that loves attention and being involved in everything their family does.

When it comes to choosing a name for your black and white Pomeranian, the sky is the limit. You can go with something classic like “Sooty” or “Panda,” or get creative with a name like “Oreo” or “Cookie.”

If you want your pup’s name to reflect their unique coloration, there are plenty of options to choose from. For girls, you could go with names like “Snowball” or “Ebony and Ivory.” For boys, try out names like “Tuxedo” or “Polaris.”

Whatever you decide, make sure it’s a name that you and your furry friend will both love for years to come!

How much is a black and white Pomeranian? 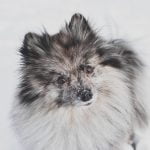 What is the rarest color of Pomeranian? 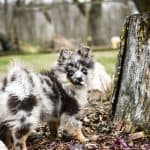 Pure black and lavender Pomerania are the rarest colors among the Pomeranian breed.