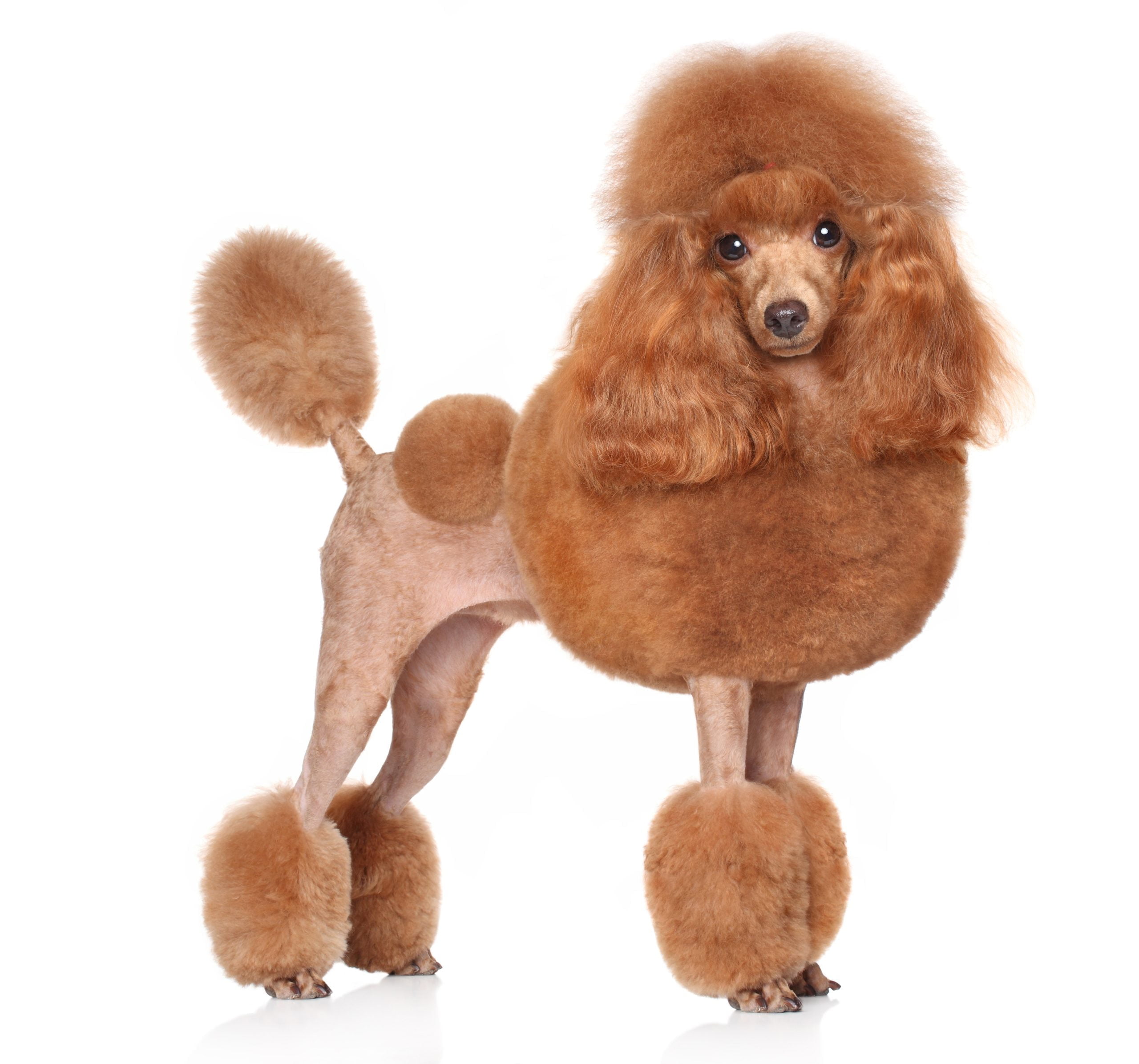 If you’re looking for your best furever friend, the brown Poodle is not only intelligent, but also a devoted, loyal, and cheerful dog. These long-legged good boys and girls with their intense-looking brown eyes can melt your heart. Adding to their uniqueness, they can even change colors by two years old.

Let’s get into the different brown Poodles out there; there are so many of them!

While most brown Poodles are born dark in color, that color fades as they mature. A brown Poodle has a deep, dark color, while a café au lait Poodle is much lighter. But both of them are cute as a button and excellent watchdogs, too.

Brown Poodle puppies are not only adorable. They’re also easily trainable. Because they are smart, these curious dogs thrive on learning.

According to Dog Breeding Info, “the standard Poodle is a medium- to large-sized dog” with a coat that is “either curly or corded.” These noble-looking creatures are a very versatile breed.

Miniature Poodles stand in between a toy Poodle and a standard Poodle from 11 to 15 inches in height.

Meanwhile, the stunning brown toy Poodle is even smaller than the miniature, making it the smallest variety of the Poodle. Pedigree.com notes that “the toy Poodle is a clever, lively, and loyal companion. And, as one of the most intelligent breeds, they’re also easily trained. The toy Poodle can be good with children but is usually recommended for older kids; younger children may accidentally hurt this tiny pup with rough play.”

The company also says that the average fully-grown toy Poodle stands at about only 10 inches tall and weighs between six and nine pounds — some, even less. So, it is slightly taller than the teacup Poodle, but not by much.

One of the good things about toys and miniature Poodles is that you can take them places with you as your companion. My aunt used to bring her beloved toy Poodle everywhere dogs were welcome. They are great for living in smaller homes and apartments.

Despite their differences in size, Standards, Miniatures and Toys have the same build and proportions.

In addition, brown Poodles also come in these special sizes:

The teacup Poodle is a fascinating variation of the Poodle. It is a toy Poodle that is smaller than the American Kennel Club toy Poodle standard. These adorable little dogs are under nine inches tall and only weigh six pounds.

The giant Poodles are, as one source notes, “simply Standard poodles that are bigger than the average. They can stand to an incredible height of 20-28 inches at the shoulder and a whopping weight of 80 to 90 pounds which is comparable to that of the Bernese mountain dog.” That’s a big dog!

There are currently 40 different mixes, so you have much to choose from in the Doodle world. Here are some Doodle combos to choose from:

The Goldendoodle is a cross between a Poodle and a Golden Retriever. Goldendoodles are absolutely adorable doggos. They’re big lugs with loving faces. There is a large variety of “doodles” that are mixed breeds.

These beautiful dogs are also known as Labradoodles since they are a cross of the Labrador Retriever and Poodle.

One of the parents is a Poodle, and the other parent is from the terrier group of dogs.

The brown Poodle Maltese mix is a great family dog called a Maltipoo.

Dogtime.com notes that the Chi-Poo “is a cross between the Chihuahua and Toy or Teacup Poodle dog breeds. Compact, energetic, and great with kids, these pups inherited some of the best qualities from both of their parents.”

The brown Shih-Poo mix is a beautiful cross between a Shih Tzu and a toy Poodle.

Brown and black Poodles are two of the most popular colors, and you can see why.

The merle Poodle is a bit more complicated because the dog’s color isn’t specific. According to Pupvine, “A merle Poodle is a Poodle that has its coat patterned with patches. The solid-colored base has a pattern on top in the same color as the base. The pattern resembles that of a leopard.”

The Parti Poodle isn’t named because it likes to party with other dogs at doggy venues. “Parti” refers to a “part white, part black/brown/red/blue” coloring in the Poodle. They’re very unique looking, and they’re great family dogs.

PuppiesClub.com explains that the brown Poodle is “commonly compared to café au lait,” adding that, “brown toy Poodles are darker and more profound. While the BB [black] gene creates black poodles, brown ones come from the bb [brown] gene.”

The site further states, “Some pet owners consider white Poodles an albino dog. But they are not. Although some have dark-colored eyes, other light-coated Poodles may have amber eyes.”

The teddy bear cut on a brown Poodle or Doodle is probably the cutest thing ever, with the hair being kept at about 1-2 inches long at all parts of the dog’s body. As the name suggests, the brown Poodle with this cut looks like a teddy bear that’s come to life.

There are different ways to groom your Poodle, but the teddy bear cut is probably the cutest. Well, I think so, anyway.

We’ve already mentioned the teddy bear cut, but the summer cut is also a low-maintenance haircut for Poodles. The puppy cut is more of a natural trim, leaving the hair at one to two inches.

The Continental cut is fancier, which gives the Poodle the appearance of having pompoms of fur on its tail, ankles, and hip. And there is the German trim that’s pretty fancy looking, too, with the use of angles in the haircut.

And lastly, there is the modern cut that accentuates your Poodle’s natural features. The hair on the Poodle’s body is short, while the fur on the head, ears, and tail is longer.

What is the rarest color for a Poodle? 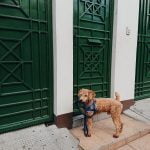 According to Rarest.com, “red is the rarest color of a toy Poodle. Although they are the same as Poodles of any other color, they remain rare because their color is inherited.”
And, of course, they’re absolutely adorable. That’s another trait that every variation of the Poodle has in common.

What color Poodle is the smartest? 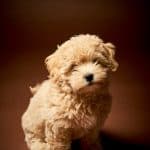 The answer to this question is debatable in the Poodle community. One source reports, “Some people say that black and white Poodles are the smartest, their reasoning for this being that these are the original standard colors for Poodles, where breeders focused mostly on intelligence and temperament.”
Regardless, Poodles are known for being brilliant dogs. That’s why they are easy to train: they are people-pleasing dogs!

Why is my brown Poodle turning white/silver? 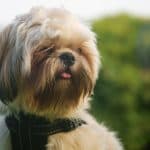 Like people, it can be a sign of aging, but that’s not always the case. Depending on your dog’s age, it takes a while for its permanent color to set in.
Cuteness.com explains: “Some Poodle puppies are born with a mutation on a gene that causes a dog born black or brown to begin to turn grey or a white silver at three months old. These dogs are usually completely white, silver, or grey by maturity.”
So, they aren’t just cute. They’re interesting, too.

Can a brown Poodle change color? 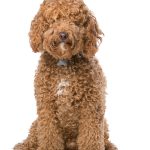 They sure can! By the young age of two, brown Poodles could possibly change to a café au lait hue.

Is my Poodle brown or blue? 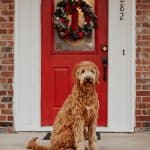 Yes, there are blue Poodles. They’re rare but not compared to the red Poodle. They aren’t born with blue coats, though. These unique-looking dogs’ coats have faded from black coloring. That change happens at about two-years-old. The brown Poodle has a beautiful creamy coat, and its amber-colored eyes look like cute little buttons.

How much does a brown Poodle puppy cost? 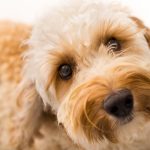 They aren’t cheap. The price for a standard Poodle, according to TheGoodyPet, “ranges from $500 to $2,500, depending on where you live.” The site explains that the high price is “because people like the natural curls of a Poodle. Taking care of a Poodle each month is about $100, but if you have it groomed regularly, it can cost up to $350 each month.”
Yes, they cost a pretty penny, but they are loyal, dedicated family dogs that are easy to train. All of the different Poodles have a commonality; they’re beautiful dogs, and each variety comes with an interesting story. And they love their humans!